Since 1990, students from CalArts‘ Herb Alpert School of Music have had the opportunity to create a CD of original jazz and eclectic compositions at the historic Capitol Studios in Hollywood. Both Capitol and EMI Music have supported the annual project to showcase the talents of the young musicians at CalArts, who often contribute music that’s far removed from the textbook definition of “jazz.”

All students are welcome to submit their demos, and the finalists are chosen by a faculty committee. Once in the studios, all the tracks are recorded live — which is almost unheard of in an era of multiple takes, samples and remixes.

Check out Brandon Sherman’s composition “Quiet in the Library!!!” from this year’s Capitol CD project. It features Sherman on trumpet, Andrew Conrad on tenor sax, Brandon Schmidt on bass and Colin Woodford on drums.  If you like what you hear, feel free to listen or download the music from the Jazz CD archive pages.

Brandon Sherman – “Quiet in the Library!!!”


The project also gives a chance for the Institute’s design students to be selected for CD cover art. Click through the gallery above for the past 20 years of covers.

After the jump, read a more detailed story on the jazz CD project. 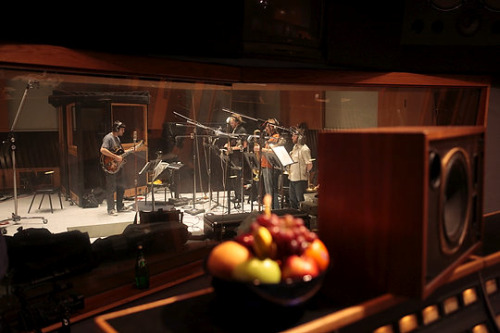 The last Monday of each academic year signifies the end of classes and an imminent commencement. It also brings something equally anticipated – the release of the annual CalArts Jazz CD. This year, the occasion was made all the more noteworthy by the release of the CD’s 20th annual pressing and the launch of the CalArts Jazz CD Archive, a comprehensive Web site that showcases all 20 recordings, along with links to those musicians and graphic designers who brought each creation to life.

Both the CalArts Jazz CD and its companion Web site were conceived by David Roitstein, director of the CalArts Jazz Studies Program and Mel Powell Chair in The Herb Alpert School of Music. But Roitstein credits President Steven Lavine and Board of Trustees member and former Capitol/EMI President Joe Smith for making the vision a reality. “We had wanted to do this since starting the program in 1983. But it wasn’t until Steven came on board in ’89 and approached Joe, that we were able to begin the project,” Roitstein recalls. Thanks to Joe’s enthusiasm, Capitol/EMI produced the first CD; the company has continued to do so, providing studio recording time and their best engineers for the two-day session.

Everyone at the record company treats the students as professionals, which greatly benefits them. “I want students to have an ideal experience,” Roitstein says. “That way, after they leave CalArts, they’ll want to have that again.”

All CalArts students are eligible to have their music featured on the CD. Interested artists begin composing in the fall. In February, they submit their work to a committee, mainly comprising faculty members from the jazz program, which provides feedback and narrows the field. To determine who will ultimately be recorded, bands perform in March at Tatum. “It’s a big party for everyone,” Roitstein emphasizes. “We definitely don’t want the process to feel like a contest.” After the final groups are selected, they record at Capitol in April, and Roitstein, working with an engineer, mixes and masters the recordings in time for the CD’s release. The result is an eclectic mix of the year’s most interesting sounds, highlighted by artwork chosen through a similar selection process and, as Roitstein explains, best feels like the music—“which most of the time wouldn’t be labeled as jazz at all,” he adds with a laugh.

The CalArts Jazz CD is distributed for free, and individual compositions can only be used in non-commercial ventures. To keep costs down, pressings are limited, which was one catalyst for the Web site. “It’s great that listeners from all over the world, who wouldn’t necessarily have access to the CDs themselves, can hear and see the early work of extraordinary artists and learn about the amazing art being created at CalArts.”