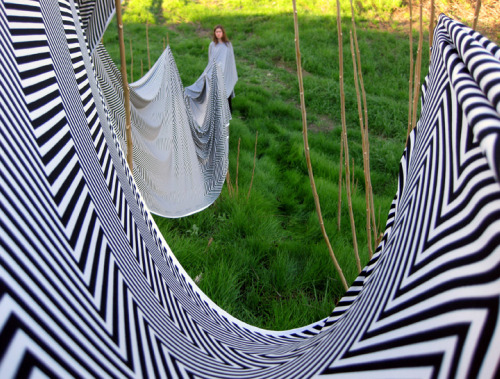 The Fellows of Contemporary Art in Los Angeles hosts the exhibit Performing Economies through July 26. Elana Mann (MFA 07) recently named a recipient of the California Community Foundation Fellowships in Visual Arts, curated the show that comprised many local artists. We asked her to elaborate a little on her curatorial statement, and comment on a few of the works in the exhibit.

“Performing Economies crystallizes a growing movement of Los Angeles-based artists who are addressing current political calamities through methodologies of participation, collaboration and community involvement.  The artwork that I chose to highlight in Performing Economies emphasizes artists who aim at exploring alternative economies of activism and intimacy in this time of global political and economic crises.” 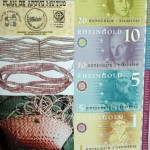 “For my contribution to the exhibit I created Complementary currency in three acts, a series of alternative currencies that were produced in consultation with three separate communities that I am a part of.  These currencies are being utilized within each group for different purposes, such as promoting volunteerism, gifting and community involvement.” 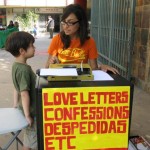 “The Artists for Social Justice Coalition created the Free Free Market, which was a day of gifting such things as hand-typed love letters, homemade “seed bombs,” a singer offering free voice lessons.  One of the artists had a table of goods she was giving away, from cans of soup to jigsaws that were all ‘acquired’ (or stolen).” 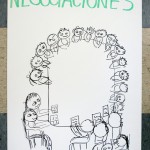 “Ashley Hunt and Taisha Paggett created On Movement, Thought and Politics: Garment Worker’s Center, Los Angeles/ En el movimiento, el pensamiento y la política: El Centro de Trabajadores de Costura, Los Angeles (2009) for the exhibit.  They began working with the Los Angeles Garment Worker’s Center this spring on movement workshops relating to the political and physical realities of the garment workers. Hunt and Paggett filmed the workers directing each other to physically recreate some educational posters that indicate (through endearing hand drawings) different ways to position oneself in negotiations, confrontations with bosses, and discussions with each other.”

The closing reception for Performing Economies will be held on Sat., July 25 from  2-4 pm.