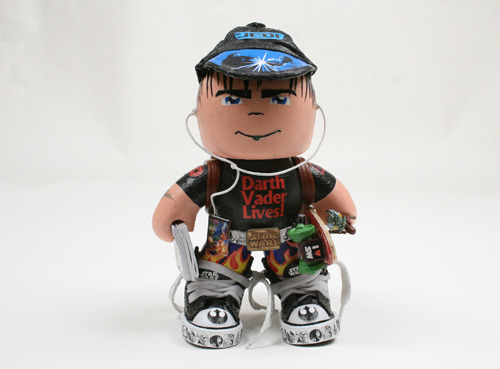 In The Empire Muggs Back, Darth Vader and Luke Skywalker are fighting on the same side. But we’re not talking about a film sequel or a comic book storyline—it’s a charity art auction to benefit the Make-A-Wish Foundation.

More than 60 figures are now available for bid online until Aug. 14. Also among the contributing artists is Troy Alders, a CalArts graduate (Art BFA 87) and a member of the alumni board, who’s been the Lucasfilm Licensing art director for Star Wars merchandise since 1994. His Mighty Muggs figure represents the upper echelon of geekdom: the Star Wars Fanboy.

“The fanboy is the person that has every possible thing you could buy,” Alders said, pointing out items like the boy’s iPod skin, belt, the tricked-out skateboard, hat and miscellaneous Star Wars tattoos. Not coincidentally, his model wears some of the merchandise that Alders helped create in real life.

The piece is part decoupage, using paper and glue, and part improvisation: “I think I found the sneakers in a Japanese store. “ As of today, the current bid for Alders’ Star Wars Fanboy stands at $60, with 10 days left in the auction.

Check out the slideshow above for a closer look at Fanboy and a few more figures from the auction. To view all the items up for bid, please visit The Empire Muggs Back.