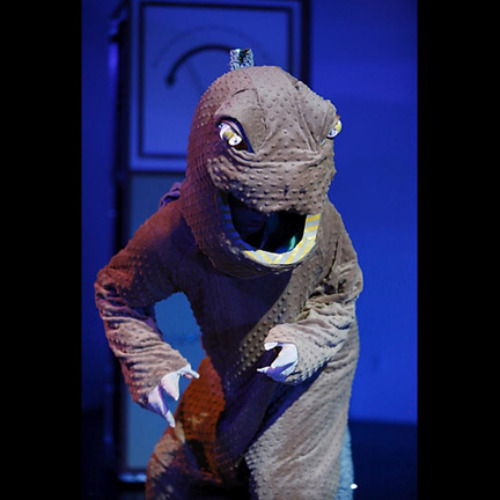 A contingent of School of Theater students, faculty and alumni led by Jon Gottlieb, the head of the school’s Sound Design Program, is in Scotland again this year to take part in the Edinburgh Festival Fringe, the world’s largest arts festival. Collectively dubbed CalArts Festival Theater, the School of Theater group is presenting three works:

One Eye Gone, a re-imagining of the Godzilla story staged by experimental puppeteer Katherine Shook (Theater MFA 09) from an adaptation by playwright Erik Ehn. Shook’s staging of this allegory, which explores contemporary society’s impact on the environment and the idea of “monsters,” features four doll-sized puppet heroes menaced by a human-sized beastie. This work was first presented at CalArts in 2008.

The second piece is I Like It to Be a Play/Every Afternoon, an adaptation of two short Gertrude Stein plays directed by faculty member Marissa Chibas and enacted with an energetic ensemble of whimsical, sardonic characters who embody Stein’s poetic texts.

Rounding out the CalArts lineup is Dawn of Quixote: Chapter the First, an original work written and directed by Juli Crockett (Theater MFA 01) based on the writings of Spanish philosopher Miguel de Unamuno y Jugo. Dawn of Quixote includes live music by Crockett’s freak-folk band The Evangenitals. This piece had been previously presented as part of Edgefest in Los Angeles.

(Crockett, by the way, is the former professional boxer who inspired the gutsy fighter portrayed by Hilary Swank in the 2004 movie Million Dollar Baby, the multiple Oscar-winner helmed by Clint Eastwood.)

The Fringe also brings a new production of Couples Counseling by New York-based playwright and arts journalist Carey Lovelace (Music BFA 75). Presented by Loose Change Productions, this quirky comedy explores therapy in a New York setting in a series of stylized vignettes that charts the relationship between a therapist and two patients in marital crisis. Couples Counseling received its world premiere at REDCAT in 2004.