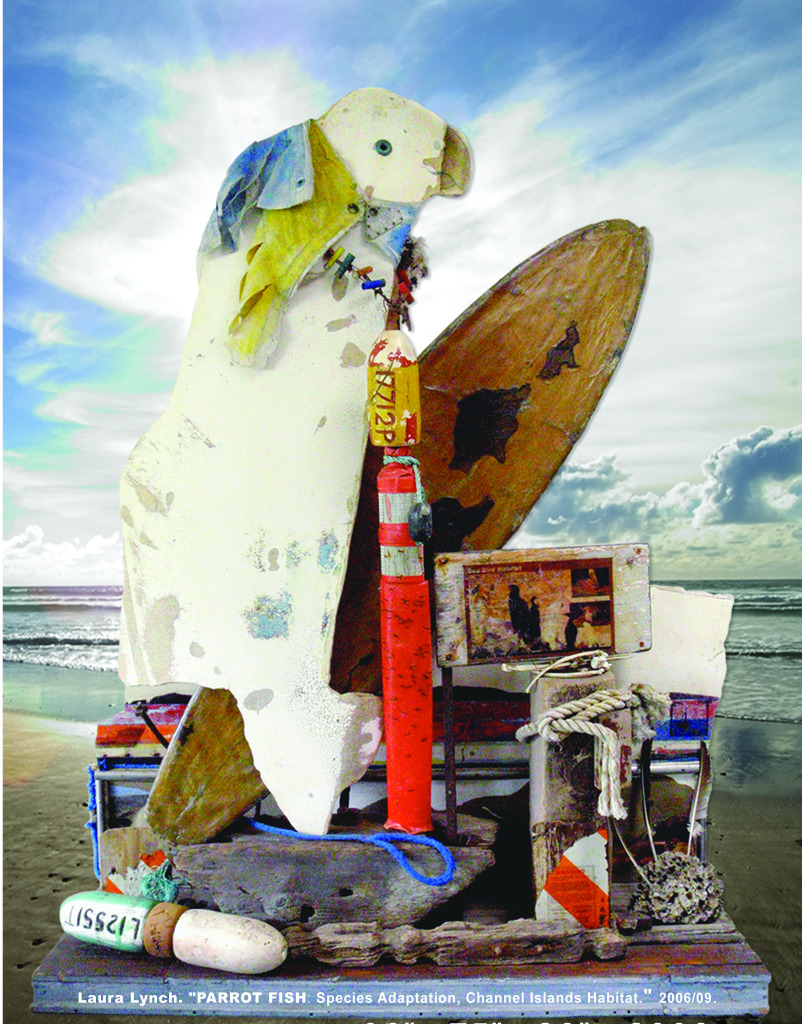 The Politics of Green is a group art show in Ventura, Calif., that explores environmental issues affecting society in a globalized world—from various viewpoints and interests. The exhibit challenges viewers to address these issues through different media, including video, installation and performance.

Laura Lynch (MFA Art 84) has contributed to two works to the show: Parrot Fish and Fair Game. The Santa Barbara resident’s métier is environmental assemblage, in which she incorporates found objects from the beach and other sites into her pieces. There is a definite green message behind her art.

For The Politics of Green, she included Channel Islands’ gatherings (e.g., bullet casings, shells, tar and feathers, sail cloth, buoys, rebar) to help demonstrate her concern on the environmental impact of oil rigs, offshore processing plants and diesel-burning cargo ships. “I wanted to draw attention to the fragility of our coastline and address the threat of air and water quality to the [Channel] islands and the mainland,” she said.

But the two works included also call out the National Park Service’s (NPS) decision to exterminate both the Santa Cruz Island feral pigs and the Point Reyes National Seashore non-native deer. Here’s a snippet from her artist’s statement:

Rather than use antiquated inhumane extermination methods by contracting hired hunters to slaughter hundreds of defenseless animals, why not insist that all future actions made by NPS on behalf of the environment and future generations be part of a well developed non-violent policy of management for wild animal populations? Removal to other locations or methods such as inexpensive contraception procedures with non-lethal darts are being used successfully in other parts of the country and can be easily adopted and put into practice throughout California.

Lynch believes that her eventual evolution as an artist will be less object-specific and more site-specific installation, joining other “eco-artists” who travel beyond the gallery walls to inform and educate audiences about nature and its often-at-odds relationship with the modern world.

**Artist will be in the Gallery on Friday, Sept. 4, noon to 3 pm for Ventura’s First Friday Artwalk.