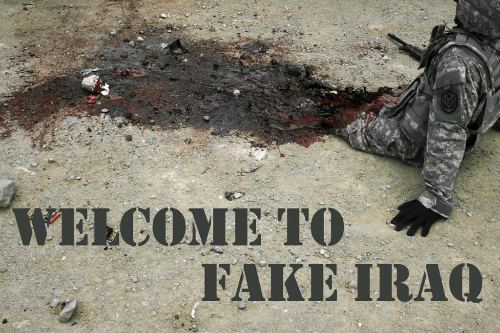 In the middle of the Mojave desert, there’s a 1,200 square-mile simulation of the Middle East where U.S. troops are sent to participate in “theatre immersion.” Located in and around Fort Irwin, the National Training Center (NTC) houses entire cities built out of Conex shipping containers–with Iraqi and Afghan actors and soldiers playing insurgents.

Since January 2008, the NTC has been looking to embed journalists with troops training at the Center. And many of the artists in the upcoming Welcome to Fake Iraq exhibit (opening Sept. 6 at Angels Gate Cultural Center in San Pedro, Calif.,) were among the first “journalists” to embed.

Welcome to Fake Iraq features the work of eight artists from CalArts, who were given the opportunity to document or react to the experience of being a (fake) embedded journalist either at Fort Irwin or Fort Polk in Louisiana.

According to the exhibit statement:

This is neither a pro- nor anti-war exhibit; instead, the work ranges from the warm empathy of Maria Schriber’s portraits of ‘insurgents’ to the implied criticism of Chris Revelle’s portable recruitment station. The idea behind the exhibit was to present a broad array of work by artists, many of whom never had any previous close contact with active-duty military. Both as a document of war games in the twenty-first century and as a collision between the cultures of the artist/civilian and the soldier, Welcome to Fake Iraq seeks to explore what warfare and war games mean to us, now, while two wars continue on the other side of the world.

Fake or not is beside the point, the images, video and text in the exhibit make the U.S. wars in Iraq and Afghanistan a little more real.