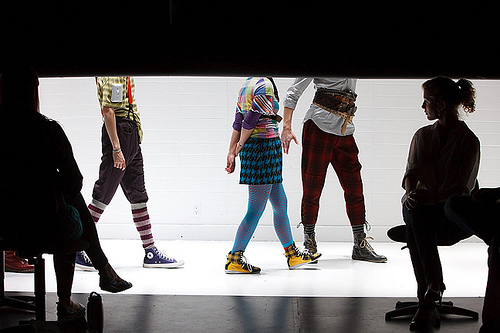 Though Grace Kelly left acting to become Princess Grace of Monaco in 1956, her passion for the arts remained evident until her death in 1982. Her legacy continues on through the work of her foundation, which last week announced the 2009 Princess Grace Award winners. The honored recipients included two from CalArts: director Lily Whitsitt, a CalArts School of Theater MFA candidate, and Dawn Marie Stoppiello (Dance BFA 89) co-founder and co-artistic director of Troika Ranch, a multimedia performing arts company based in New York City.

Whitsitt and Stoppiello will be honored at the Princess Grace Awards Gala in New York City in late October. The awards are part of the foundation’s efforts to assist emerging artists at the start of their careers. This is the third award, however, for Stoppiello who previously received a dance scholarship in 1987 and a 2004 Princess Grace Statue Award. She has received the 2009 Special Project Award–available to past Princess Grace Awards winners—that continue and advance their artistic development.

Below we’ve highlighted Troika Ranch’s Future of Memory, a work choreographed and directed by Stoppiello in collaboration with the  performers: