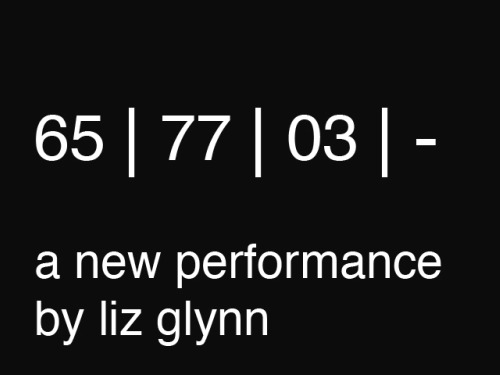 Liz Glynn closes out The Ups & Downs series this weekend at workspace in Los Angeles.

The Ups & Downs, a year-long art series, comes to an end this weekend at workspace in Los Angeles and features Liz Glynn’s (Art MFA 2008) performance-piece 65 | 77 | 03. Curated by Mathew Timmons (Writing MFA 05), the works in the series have been described as “ephemeral installations.” They are meant to be immersive and temporary: “We’re opening one night and closing the next night,” he says.

The genesis of this project was Timmons’s desire to curate a show that would comment on the usual “ups and downs of the art market.” But then 2008 happened: The bottom fell out of the stock market, the mortgage crisis hit and the country entered into a recession. The works that Timmons included in The Ups & Downs also reflect the current turbulent socio-economic conditions. The pieces ran the gamut from heavy multimedia approaches to more low-tech strategies, like Glynn’s.

This weekend’s exhibit 65 | 77 | 03 is her “meditation” on New York City blackouts during the past 40 years: in 1965, 1977 and 2003. Timmons notes that reaction by New Yorkers to each of the blackouts mirrored the economic conditions of the times. There was relative prosperity in 1965, and people remained calm. In 1977—also known as the Summer of Sam—there were riots. The 2003 blackout of the Eastern seaboard registered relatively few violent incidents.

Based on interviews and news accounts of each event, Glynn will stage a series of vignettes exploring the social dynamics of a city gone dark. Timmons explains that the first night (which is already at capacity) will feature a dinner by candlelight, which many New Yorkers prepared and enjoyed in 1965. Saturday’s staging will reference the 1977 blackout and include a scene from a looted restaurant.

Now while the installations may be temporary, Timmons, along with Stan Apps of Insert Press, are making sure that there’s a more lasting writing component to the series. The two have been writing companion pieces to each of the works, and will assemble a small catalog of Ups & Downs with additional essays contributed by each of the artists and guest authors, including journalist/critic Holly Meyers and CalArts music faculty Sara Roberts. Timmons hopes to have the catalog out by the end of the year.