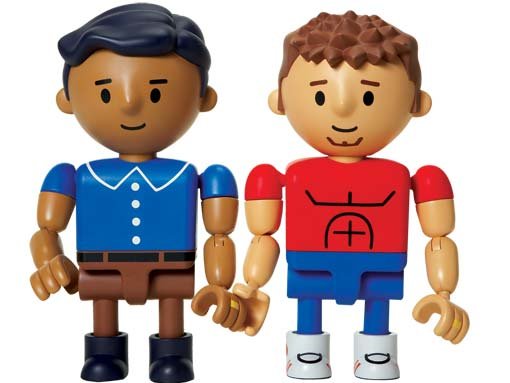 Rick and Steve are the happiest gay couple in the world. / Photo courtesy of E4

Q. Allan Brocka’s (Film/Video MFA 01) stop-motion animated sitcom Rick & Steve: The Happiest Gay Couple in All the World is back on U.K. channel E4 for its second season. Featuring Bob the Builder-like figures as the inhabitants of a fictional gay community, West Lahunga Beach, the show draws its comic material from subjects such as cruisy cruises, would-be lesbian moms in search of sperm donors, and threesomes.

Brocka first created Rick & Steve as an 8-minute short when he was at CalArts. The 1999 film was so popular that it got into several international festivals, including Sundance, and achieved cult status. The sitcom version of Rick & Steve debuted on the Logo network in 2007 and on E4 last year. (He’s still waiting to hear whether the show will be picked up for season 3.)

The Guardian’s Sam Delaney recently spoke with Brocka about the show’s development, its envelope-pushing depiction of gay characters, and the various social issues it raises.

“When I was growing up, there were no gay characters on TV,” Brocka told Delaney. “It was revolutionary when something like Will & Grace came along. But even then, none of the characters were really in relationships. My main intention was to explore real gay relationships and not leave out any of the shocking stuff.”

Check out a clip from the show (NSFW – not safe for work):