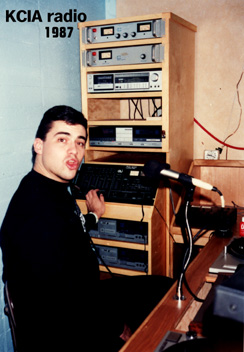 DJ Waxturnal serves as the nom de plume for Robert Loveren (Film/Video BFA 89). We recently asked him a few questions about his music, CalArts pirate radio and for a sample of beats to share with the 24700 audience.

24700: We hear you helped start KCIA (CalArts radio) as a pirate radio station. When did this happen and how?

RL: It was the fall of 1985, a couple of guys across the hall from my dorm room asked if I was interested in getting the school’s first radio station off the ground with equipment CalArts just acquired from some LA station that was going under.  The station was to occupy an unused office space, D-211, right around the corner from the student lounge.  Equipment was set; the “On The Air” red light was on, including the signal processor that we adapted to send the signal through to the dorms and main building studios.  The coaxial alteration was put in place because we didn’t have a license to broadcast out over the airwaves…and the school wasn’t going to pay the cost anytime soon!

It took awhile before we found out that our coaxial system was leaking a slight signal out to the airwaves…not only were Calartians listening to our uncensored-raw shows, but half of Hart High School (in nearby Newhall, Calif.) was picking it up in their cars down the hill!  We were the rogue-true pirate radio station (without really knowing it).  With no limitations, we were everything KCRW and college radio wanted to be!  The station had holes in the lineup during the years ’85-’89; my obnoxious show was actually gaining listeners from the dorms and from those who stopped by my open studio door to party on the air.

24700: What’s a filmmaker doing making all this music?

RL: Music has always influenced my films.  My earliest Super 8 films made while I was in high school were silent, but set to music.  At CalArts, my longer 16mm films were entirely set to music with no dialogue. I never was very Hollywood bound, as my films were more rhythmic and poetic than mainstream. Like a camera lens, the sound mixing board also became a tool that enabled me to tell a story while evoking emotion from my audience.

Surrounded by underground LA bands in the club scene as a DJ, the ’90s paved a path of seven music videos I would  produce and direct.  Since most music videos today are as homogenized as the plastic pop songs they are connected to, my creative flow was slowly converting to an emotional journey of mixing audio to tell a story.  DJ Waxturnal was born…composing and mixing music with the dramatic sensibilities of a filmmaker!

24700: For the untrained ear in emo/electronica etc., describe the music you create.

RL: “Emo-tronic” is one of the categories suggested by the different sites that promote and sell my music (CDBaby, iTunes, Amazon).  It’s electronica that takes the listener on a roller coaster of emotions without relying on any lyrics.  My main influences are the new wave-neuromantic ’80s, along with a heavy dose of the ’90s industrial dance.  Each song I do tells a story, put together like a film, the only way I know how.  While composing in the studio, I know that a song is in the works when it’s taken my emotions to an almost over the top cinematic-dramatic level…very much like the high I experienced as a kid in the ’70s watching the movie Earthquake in “Sensurround.”

24700: What’s the track/music/mix that you’ve shared with us today? What was its inspiration?

RL: The track below is “A Bleeding Heart,”from the CD Disappointed Optimist v3.0. My inspiration?  I guess I was feeling kind of broken-hearted at the time.