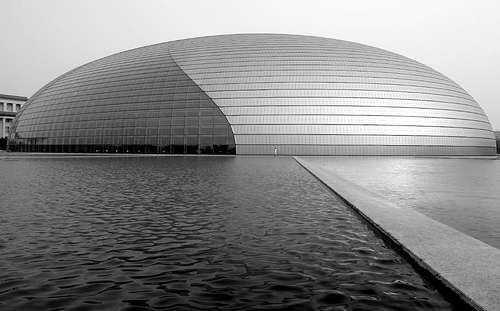 Alice Tuan, head of the Writing for Performance program at CalArts traveled to Beijing, China, for the International American Studies Association (IASA) conference last week. 24700 asked Tuan to drop us a line and let us know how the conference and her adventures in China were going. (She’s had practice before blogging on her own site Alice in Shanghailand.) Here’s what she e-mailed us back, in her own inimitable style:

China is in a super mood! On October 1, the whole nation celebrates the 60th anniversary since Mao and the Commies took over. Was in Tiananmen Square on Monday and boy was it getting red (as in carpet and festive decorations), with 56 huge red and gold classical roman columns (Western modernization?) lining two sides of the square, each pillar animatedly painted with one of the 56 ethnic groups of China (did you know so there were so many, since it’s all so overwhelmingly Han Chinese). Yup in the mix are the Tibetans and the Uigurs (those Muslim Xinjiang folks out West) with their ethnic costumes and cheeky dance poses. Look kids, how multicultural China is!

And with the two hugest, longest LED screens showing the most gorgeous footage of all of China’s wonder–the Great Wall, the Summer Palace, the lotus flowers, Huangshan mountain, the Birds Nest Olympic Stadium, the Bird’s Egg National Theater, the Shanghai skyline, the happy children, the crowded taxis, the super hipsters, et al–Mao, from across the huge Tiananmen way, has the best TV screens of all to see how his country has flourished and prospered, at least this performance of it. The day was sunny and blue-skied as if the planets were celebrating as well. Tourists, especially those from all around China, were particularly proud to be taking pictures in the square.

I was at the IASA “Decoding American Cultures in a Global Context” conference. It was illuminating in so many ways, not just the varied and interesting papers presented, but because the Chinese scholars of American Studies had an international audience to present their work to. This was the 4th World Congress (the others were in Europe and Canada) and particularly exciting and historic for all since it was the first to be held in Asia.

Having it in China allowed so many Chinese scholars who normally would not have chance to travel and interface with such an international body, and more importantly learn how their views are stand in the international context. One keynote speech noted how “oriental” and “occidental” are alive and well, particularly in response to the notion of having the IASA congress in Asia–But that’s too far–too far from what, Susan Desmond wondered. It’s not far for the Chinese. Another speech asked that the paradigms of American Studies from the past not be clung onto too sacredly, especially as the demographics of the U.S. is changing so rapidly.

I have lots to say about this–more to come. But the gist–and this was a microcosm of China’s situation: Does modernization for China mean an imitation of the West and its frameworks or can it find a way to grow and progress on its own terms? Dare it critique the West with Chinese eyes while trying to fit in on the Western-dominated world stage?

(I took photos but forgot the cord and so can give images when I get back next week.)