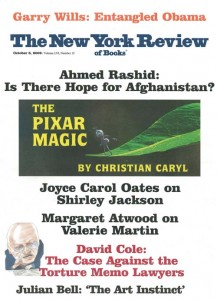 The featured cover story in the Oct. 8 issue of The New York Review of Books, “The Pixar Magic” by Christian Caryl, focuses on the film WALL-E and three new books about the phenomenally successful animation studio: The Pixar Touch: The Making of a Company by David A. Price, Vintage; To Infinity and Beyond! The Story of Pixar Animation Studios by Karen Paik, Chronicle, and The Art of Pixar Short Films by Amid Amidi, Chronicle.

…if there’s one understanding that distinguishes the studio’s work, it’s that technology can take you only so far. Unless you learn how to infuse it with human values (like the pleasures of storytelling), even the most seductive images will lose their way.

Here’s the trailer for Pixar’s current re-release of Toy Story and Toy Story 2 in 3-D that exemplifies the studio’s dedication to keeping “art at the center of their enterprise”: