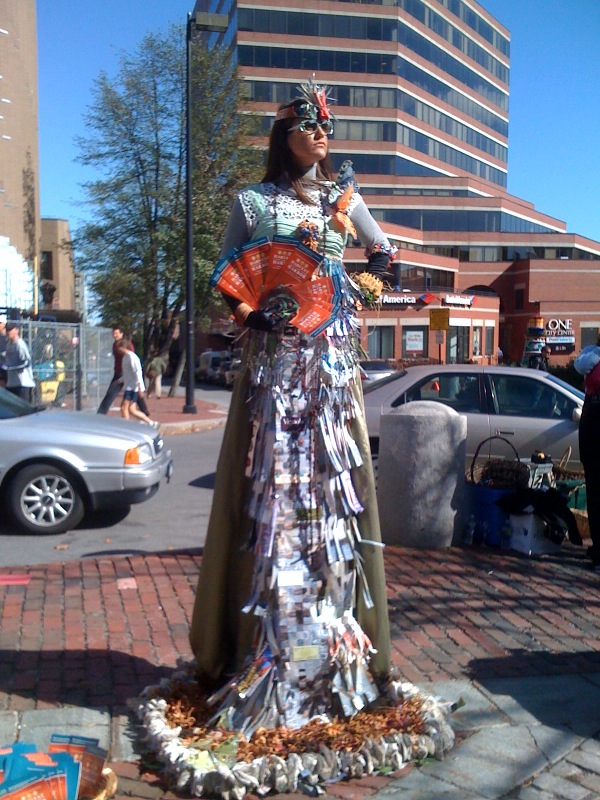 Meredith Alex's MADgirl fashion art at the Harvest on the Harbor festival in Maine this past weekend. | Photo courtesy of Meredith Alex

The designs of Portland, Maine-based artist Meredith Alex (Theater BFA 90) served as the centerpieces of the city’s Harvest on the Harbor festival this past weekend. But her signature works weren’t mounted on gallery walls or displayed in cases–they were worn.

Alex calls herself as an “eco-fashion designer” who creates “sculptural dresses.” However you describe them, her MADgirl studio designs are fantastical and full of whimsy.

Mainebiz, a local business publication, interviewed Alex about her creations just days before the festival:

On Monday, she was working on a long, slim dress fronted with a panel made with woven strips of last year’s Portland tourism, accessorized with a bouquet of blueberries and corkscrew pieces of dried apple. Another is a huge Southern belle hoop dress, composed of bunches of grapes, apple peels, blueberries and mollusks — a tribute to foodies of every stripe.

“I try to fuse fashion, sculpture and performance art,” says Alex, who laughs when she thinks of the scale of the Harvest on the Harbor project. Earlier, she lugged and scrubbed bushels of oyster, mussel and clam shells gathered from local restaurants that will find their way into the skirt of one of her fantastical dresses. “I guess you could say this is where the creative economy is really important,” she says.

Alex, who learned to sew growing up on her family’s farm in Freedom, is a graduate of the California Institute of the Arts, where she studied costume design. She left a position as director of programs at the Waterfall Arts Center in Belfast to pursue her art in Portland. In addition to her commission pieces, she creates one-of-a-kind and couture fashions at her studio, which also serves as a gallery and exhibition space for other artists. An avowed environmentalist, Alex loves using vintage clothes in new ways, recycling not only the fabric, but the karma of the garb into something new.

Though she was in the midst of festival deadlines, Alex was gracious enough to send us a gallery of images of her work–past and present–and we’ve posted a few of them above.