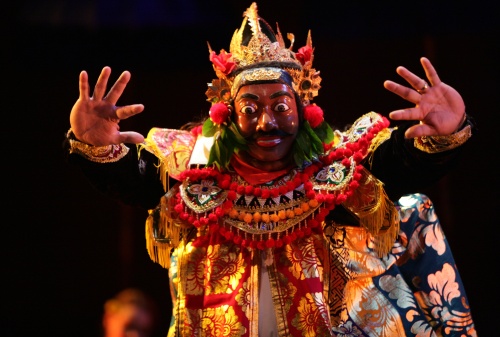 The Ramayana epic will be on stage at REDCAT next week.

The Ramayana is one of the great epic poems of India, and plays an important role in the Hindu canon. The story, attributed to the sage Valmiki, has been often been compared to the Iliad, the bible and the Arthurian legends.

Next week at REDCAT (Nov. 6-8), an ensemble of 25 gamelan players and 14 dancers enacts a Balinese adaptation of the Ramayana, which was brought to Bali from India more than a 1,000 years ago. The production, performed by Gamelan Burat Wangi, a Herb Alpert School of Music at CalArts-based Balinese music and dance group, is filled with characters who look like birds, monkeys and warriors, but may turn out to be gods and kings.

Under the direction and choreography of I Nyoman Wenten (the Nicholas England Chair of The Herb Alpert School of Music) and Nanik Wenten, Ramayana features three special guest artists from Bali: drummer I Wayan Budha and dancers I Made Dwi Putra Yoga as Rama, and Anak Agung Gede Rahma Putra, as the monkey god Hanuman. There will also be a pre-show presentation on the aesthetics of Hindu-Balinese performing arts by ethnomusicologist Sue Carole DeVale.

While the virtue-over-vice narrative is familiar, the details and language of the ancient text are complex. Vinay Lal, an associate professor of history at UCLA, provides this short summary of the Ramayana on his website:

The Koysala country, with Ayodhya as its capital, is presided over by Dasaratha. Though his eldest son Rama, son of his queen Kausalya, is entitled to the throne, and Dasaratha is himself keen that Rama should ascend to the kingship, Dasaratha’s other queen Kaikeyi contrives to have Rama sent into exile for fourteen years, as well as have her own son, Bharatha, installed as king. Though Bharatha is not a party to the plot, and is devoted to his elder brother, Rama nonetheless proceeds to the forest, accompanied by his brother Lakshmana, who is one of two sons of Dasaratha’s third queen, Sumithra, as well as by his wife, Sita, renowned for her beauty and matchless virtue. In the forest, Rama and his party have numerous adventures, but it is the abduction of Sita by Ravana, the demon-king of Lanka, which sets the stage for the epic battle between Rama and Ravana. In his efforts to find Sita, whose whereabouts are unknown, Rama is aided by Hanuman, the monkey god or god of wind. In Indian literature and mythology, there is no greater exemplar of the perfect devotee than Hanuman. Eventually, Ravana, his kin, and his entire force is defeated by Rama and his military allies, and in triumph Rama returns to Ayodhya with Lakshmana and Sita and is crowned king.

Here’s a snippet from a 2006 Gamelan Burat Wangi spring concert: