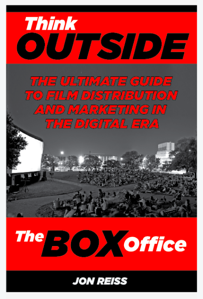 You’ve shot a pilot for a new Web series.

Filmmaker Jon Reiss (who’s also Film Directing faculty at CalArts’ School of Film/Video) attempts to answer that question and many more in his new book, Think Outside the Box Office:  The Ultimate Guide to Film Distribution and Marketing for the Digital Era. Scheduled for release on Nov. 16, the book is a guide for today’s independent filmmaker, covering distribution of all types of media content: feature film, shorts, webisodes, vlogs, etc.

The way you distribute your film can be just as tantamount as the way you make it. From an interview with the B-Side blog, Reiss says:

Distribution and marketing must start during production, better in prep, no later than post. You are killing yourself if you wait till after you finish the film. Filmmakers have to start to devote time and money to distribution and marketing – they can’t expect anyone else to do it for them anymore. Perhaps they might be one of the lucky 10 a year out of 5000 films that gets any kind of sizable advance – but those are not great odds. Better to be prepared. Also any work you do in production/prep/post will help you get that sale so it is not wasted effort.

A larger issue is that distribution and marketing needs to be as integrated into the filmmaker process as production design and cinematography and line producing. I feel that films need a producer devoted to this – who will not be pulled away from production. I’m currently calling this person the PDM – Producer of Distribution and Marketing – I’m sure there is a better acronym – but we need to create a place for it in our concepts, budgets and crewing in order for this work to get done. They will have their own coordinator and PAs as well.

To get the most pertinent information, Reiss (Bomb It, Cleopatra’s Second Husband) spoke with numerous filmmakers, distributors, publicists, web programmers, festival programmers and marketing experts for the book. He then writes about the distribution process from a filmmaker’s point of view–empowering readers with ways to develop their own strategies for their films.

To support the release of Think Outside the Box Office:  The Ultimate Guide to Film Distribution and Marketing for the Digital Era. Reiss will be speaking and signing at the following locations/events: