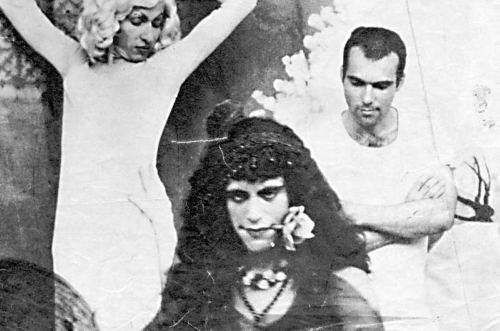 Flaming Creatures was shot, appropriately enough, on top of a movie theater in the Lower East Side. Unable to corral the real Maria Montez, Smith settled for Francis Francine, the drag-queen sheriff of Warhol’s Lonesome Cowboys, as a stand-in. Miss Francine prances around in a brocaded turban, posing, applying lipstick, and eventually succumbing to the cruelties of a transvestite vampire who rises from an Ed Wood-style paper coffin. If this sounds like an afternoon at a particularly depraved carnival spook house, it definitely has that air. But Smith was more cunning than the cheesy dramatics, “Oriental” music, mock-orgies, and mindless make-up sessions would indicate. In reformulating his treasured favorites from the catacombs of Hollywood — in this case Maria Montez’s Ali Baba — he tosses out all manner of good sense and logic, paving the way for others to do likewise after him. As arbitrary and formless as the film appears, Smith is in firm control of the frame, creating ravishingly painterly images that lull the viewer into a near-hallucinatory state. He never uses per se the collage technique common to underground film of the time, but the effect is similar through his superimposition of portions of the Ali Baba soundtrack and cheaply alluring period music.

Hoberman, regarded as the foremost critic on Smith’s work, has authored numerous articles about the artist as well as the book Flaming Creatures (and Other Secret-Flix of Cinemaroc). He’ll also discuss how the film was affected by the obscenity laws and social norms of the 1960s.

CalArts’s School of Film and Video Dean Steve Anker, who curated the J. Hoberman program at REDCAT, says that the critic’s lecture at the Bijou Theater on Tuesday night will focus on Smith’s work as a performance artist in New York during the 1960s through his death in 1989.