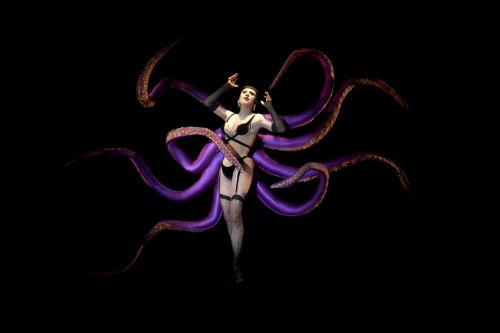 From The New York Times review of the show last year:

Mr. Arias’s dialogue, delivered in a deadpan mix of little-girl breathlessness and big-girl worldliness, will sound familiar to anyone who’s seen a New York drag show during the last few decades. (“I didn’t even get his phone number,” Mr. Arias sighs after dancing with the devil.) And of course he sings, with varying effectiveness, pop standards (“All by Myself”), acid rock (“Kashmir”), a charming original composition by Alex Gifford (“Jungle of Eden”) and, most memorably, the Holiday standard “You’ve Changed.”

As an actor Mr. Arias is not a seamless illusionist. We’re always aware of the big lug beneath the Joan Crawford maquillage and Thierry Mugler corsets. But in a way, this makes him the perfect escort into Mr. Twist’s wonderland.

Mr. Arias registers as a figure of solid human flesh aching to be transported into a world of celluloid dreams. Costumes and makeup can only take a fellow so far. That’s where Mr. Twist comes in, with a fluid mise-en-scène that allows Mr. Arias — and, vicariously, you and me — to go the distance, all the way over the rainbow.

But a show like Arias with a Twist is better off seen than described, so we’ve posted a few stills from the show (above), and included a video of a tap dance (below) that’s unlike anything you’ve probably seen before.