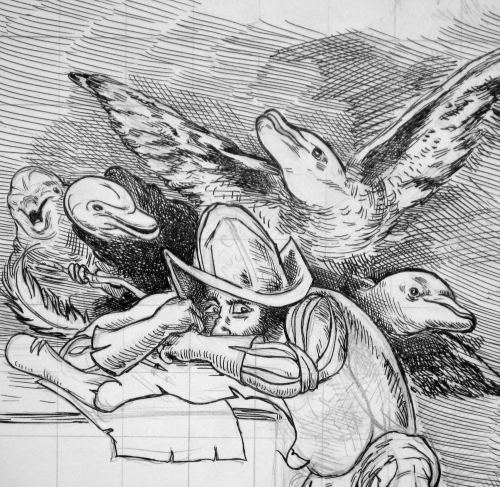 The Island of Florida: A Foundation Myth at Machine Project on Friday.

Earlier versions of the production were performed at CalArts as Hogan’s thesis project and at the Velaslavasay Panorama Theater in Los Angeles. Hogan, who by day manages the studios and galleries for the School of Art, is performing alongside fellow alumni Steven Wendt (Theater BFA 09), Anna Huff (Music MFA 07) and Audrey Chan (Art MFA 07).

The plot in a nutshell:

The story follows an orphaned lad named Delian Ponzales who, abandoned by his conquistador father and sorceress mother, is raised by dolphins but returns to Florida to find his true parents and fulfill his destiny as the creator of the Fountain of Youth. Featuring a cast of local emerging artists, actors, and musicians, and staged as a high-energy stage reading with lots of cartoon violence and power-pop anthems.

And here’s a song from the musical called “Writing The Memoirs” (courtesy of Hogan):