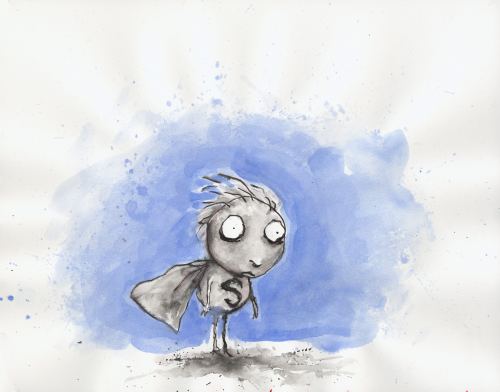 Tim Burton's Untitled (The Melancholy Death of Oyster Boy and Other Stories). 1998. | From his private collection.

A major retrospective of artist-director Tim Burton (Film/Video 79) opened yesterday at the Museum of Modern Art in New York, featuring more than 700 examples of sketchbooks, concept art, drawings, paintings, photographs and a selection of his amateur films. To date, Tim Burton is MOMA’s most comprehensive monographic exhibition dedicated to a filmmaker.

During the course of Burton’s 27-year career, the CalArts alum has established himself as a dynamic visual storyteller, with a penchant for using the outcast as lead in both the animated and live action genres–evident in such films as Edward Scissorhands, Corpse Bride and Ed Wood. (As seen in the slideshow above.)

In the New York Times review of the exhibit, Ken Johnson writes:

Bizarre monsters are a favorite motif, but what is most remarkable is Mr. Burton’s ability to generate variations on the archetype of the freakishly gifted but wounded child. From Stainboy, a superhero whose only power is leaving stains, to the dangerously dexterous Edward Scissorhands — his most poignant creation — his gallery of endearingly pathetic juvenile weirdos is impressive. But it also reflects a state of arrested psychological and artistic development. Adult sexuality, for example, almost never rears its ugly head, and despite Mr. Burton’s lifelong drawing and doodling habit, he never ventures into unexpected formal or technical territory.

It is when the drawing ideas are translated to the screen that the magic happens. The black-and-white Claymation short “Vincent” (1982), in which a lonely boy assumes the guise of Vincent Price (who narrates the film) and imagines a series of Poe-like situations, like plunging his aunt into a vat of hot wax, is truly captivating.

Burton’s aesthetic was developed from a tumultuous childhood in Burbank, Calif., where he never quite fit in to the suburban lifestyle. His illustrations were always outside of the mainstream as well, and he acknowledged being discouraged at first because of it.

In a recent interview with the Cinematical, Burton noted that it wasn’t until he got to CalArts that he realized that is was OK to draw differently: “…I was lucky enough to have a couple of teachers that promoted, if you like something, go for it, and just do it, and be passionate about it, and you’ve got a lot going for you if you do that…”

Tim Burton continues through April 26 at the Museum of Modern Art.