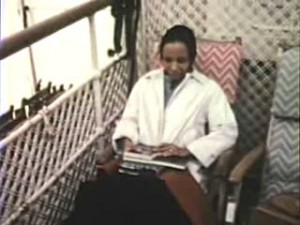 CalArts School of Theater is launching a celebration of the work of renown playwright, poet and essayist Adrienne Kennedy, with the study and presentation of three of her groundbreaking pieces during its 2009-2010 season.

Opening this week is Kennedy’s Funnyhouse of a Negro, a 1964 play that debuted in New York’s East End Theater. The production chronicles the last hours of the life of Sarah, a young black woman plagued by issues of race, alienation and identity. In the play, she’s visited by both fictional and historical characters, including Jesus, Queen Victoria and Patrice Lumumba, the murdered Congolese independence leader and first legally elected Prime Minister of the Republic of the Congo.

The playwright, who was born in Pittsburgh and raised in Cleveland, Ohio, credits a seminal voyage that she took to Europe and Africa in 1960 that inspired her writing, including Funnyhouse of a Negro. Aboard the Queen Elizabeth ocean liner, she says her thoughts wandered to Bette Davis and her film Now, Voyager.

In Kennedy’s book People Who Led to my Plays, she writes:

At twenty-nine I had felt defeated because I had not achieved my goal to be a published writer. I vowed as I stood on the deck and tugboats took us out into the Atlantic that, like the character in Now, Voyager, when I returned from the journey I would be transformed…how or exactly in what way transformed I didn’t know. Once into the voyage, while my husband and son roamed the ship I found some beautiful paper from the ship’s writing room, paper with a marvelous drawing of the Queen Elizabeth at the top of each page, and I started a new story.

That story would turn out to be her first published work.

Of that life-changing trans-Atlantic trip, Kennedy writes: “Away from all my old books, but now besieged and surrounded by a myriad of real, astounding new imagery (ocean, staterooms, the decks, standing at the rail), my unconscious and conscious seemed to join in a new way.”

The Kennedy family kindly shared home video footage of that special voyage with 24700 and we post a clip below:

Along with Funnyhouse of a Negro, two other rarely performed Kennedy works are on the Theater School docket: Sun: A Poem for Malcolm X Inspired by His Murder, and June and Jean in Concert. All performances will be held in performance spaces on the CalArts campus.