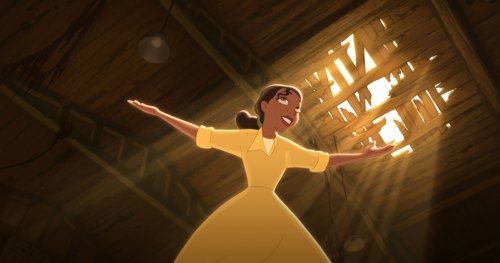 Tiana in 'The Princess and the Frog' | ©Disney Enterprises, Inc. All Rights Reserved.

Disney’s The Princess and the Frog opens nationwide today (Dec. 11) and features the work of many CalArtians, including current School of Film/Video student Minkyu Lee (Film/Video MFA 11, Film/Video BFA 09). The film tells the simple story of a young girl whose “prince” charming turned into a frog–literally. It’s a return to a familiar tale, but for the first time, the animated film has African-Americans  from antebellum New Orleans as lead characters.

Lee animated Prince Naveen and Tiana in their human and amphibian forms; his work can be seen up on the big screen in several scenes, including at the beginning of the film when Prince Naveen is introduced. Lee continues to work for Disney on an upcoming feature film, while pursuing his MFA in Film Directing.

Musker attended the Character Animation program in the mid-1970s alongside other famous alums, including John Lasseter (Film/Video BFA 79), executive producer of The Princess and the Frog. Musker’s directing credits include Hercules, Aladdin, and The Little Mermaid.

Congrats to all! If you worked on the film and aren’t listed here, please add your name in the comments section below!