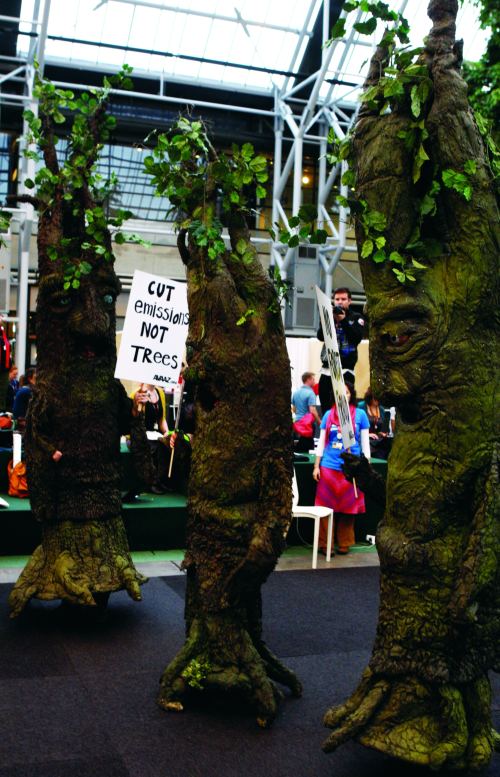 She’s acting on an official capacity for High Tide, an interdisciplinary artist-led initiative that nurtures a culture of sustainability and ecological consideration, as well as for the University of Colorado at Boulder.

The COP15 blog is a project that is immediate and visceral. While the posts run the gamut from conference food to live blogging policy-rich plenary sessions, Rahmani also provides an art and activism perspective. For example, in a recent blog post titled Children & Global Warming; green mapping, she writes:

COP15 emphasizes that children will be impacted more than any other group by climate change. Just watched an affecting international group of kids presenting their interpretations. Some have been to the Arctic as part of CapeFarewell. I cringe. I think of how the Hudson River School of Art introduced heavy industry to the pristine river in c.19.

In addition to the blog, she’s holding a three-day performance workshop, “Trigger Point Theory as Aesthetic Activism,” which began yesterday. Participants will gather for two to three hours each day, and the project culminates in a set of practical tasks and tools to effect ecological change in Copenhagen or their countries of origin.

Rahmani’s art reflects her eco-political activism. In Ghost Nets (1990-91), she purchased the site of a former coastal town dump on a fishing island, in the Gulf of Maine. The project restored 2.5 acres to a flourishing wetlands system and personal residence.

Her Gulf to Gulf project is a multiyear, cross-media work in progress. Beginning in 2009, Rahmani has been observing the impact of global warming on the Gulf of Maine and the Gulf of Mexico with a focus on New Orleans. Mixing art and science, she hopes to provide additional insight into climate change and public policy action.