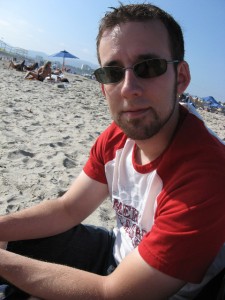 Josh Senick (Theater MFA 09) is an LA-based sound designer focusing on design and composition for theater. His current project Hamlet Shut Up, is playing at Sacred Fools Theater in Los Angeles  through Dec. 19. We asked Josh a few questions via e-mail  about his life and work after CalArts.

24700: In a nutshell, what are a sound designer’s responsibilities?
JS: In theater, the sound designer’s job is always some combination of meeting the technical and creative sound requirements of a production in collaboration with the show’s director.  The creative requirements begin with determining the sound effect and reinforcement needs of the production. This involves answering questions like: What sound effects, ambiances and music does the script explicitly and implicitly call for?  How should these be conveyed to the audience?  Will the actors or musicians need microphones?  How should they sound to the audience? The sound designer then decides what equipment will achieve the desired results, and finds or creates the required sound effects and music.

24700: Tell us about your work in Hamlet Shut Up?
JS: Hamlet Shut Up is a one-of-a-kind production.  I was very excited about the show when I was first approached by the Sacred Fools because the concept is excellent, and the production directly builds upon some of my previous work. It’s helped me strengthen some skills I wanted to continue to work on, namely improvisation at the piano.

Director Jonas Oppenheim’s goal with Hamlet Shut Up was to find a way to tell the story in such a way that it could be understood and enjoyed by anyone, no matter what language they speak–and turn Hamlet into a comedy in the process.  He wanted a silent movie-style accompaniment with specific references to more modern music for comedic accents.  I started attending rehearsals and just playing along with the scenes as Jonas staged them.  I worked from a book of silent film accompaniments to get started.  As the weeks went on, I composed some themes for characters and moments in the play, and pulled scores for the music we’d be quoting for musical puns and jokes.

By the time we reached tech, I had made choices for about two-thirds of the show, and improvised filler for all the gaps.  The show is still in a bit of flux, which is part of the fun of live theater.  Just as the actors continue to make new discoveries about their characters and motivations through the run, I’m discovering better accompaniments and better fillers to make the show better each night.

24700: How did you get interested in sound/composing?
JS: I started out as a musician.  I’ve played piano since I was in first grade and finished my formal music training with a B.A. in Music and Theater at Case Western Reserve University and the Cleveland Institute of Music.  I also acted all the way through my first year of undergrad.  After playing Curly in a “Guffmanesque” production of Oklahoma, I felt I could do a better job than that musical director and the other musical directors I’d worked with up to that point.  I started playing in pit bands after that summer and quickly landed my first jobs as a musical director.  I pursued that until I finished my undergrad, but I was getting tired of the long hours and little pay offered to community theater musical directors. (The community theaters in Cleveland are very similar to the 99-seat theater scene in L.A. except there’s no equity waiver and larger houses).

In my fourth year at Case, the theater department produced Ionesco’s Rhinoceros, a play that has the potential to be a sound-driven production.  It was the practice of our department to assign the scenic design class the same script the mainstage was producing.  I was having few strong scenic design ideas, but had strong sound design ideas.  The department was small, never had a sound designer, and the faculty had no idea how to do much besides play back a CD through the house mains.  I was taking a few electronic sound production classes at CIM and had a good idea of how to use computers and audio equipment to create and edit sound effects, and I had access to some great equipment at CIM to do my work. The day we presented our scenic designs to the director, I pulled him aside and offered ideas for the sound design as well.  He really liked them, and the school created a sound design position on the show and gave it to me.  It’s still one of my favorite productions.  The department hired me for two years to design all their mainstage productions. Since then, the music and sound have gone hand-in-hand for me.

24700: Is there work in a particular production of which you are most proud?
JS: I don’t have a production as a whole that I am proud of at this point, but there are moments in shows in which I achieved what I consider to be “my sound.”  Both these shows took place at CalArts, and incidentally both were under the direction of Emily Mendelsohn (Theater MFA 09).  The first was in the production of Beginner, a show in which I functioned as music director, composer and sound designer.  In the second act of the play, an actor is transformed into a whale by putting on a chador with a long train, and then comes out to sing a song.  Collaborating with the costume designer, Rachel Weir (Theater MFA 09), we sewed a wireless mic into the chador, which allowed me to completely transform the sound of the actor in an unexpected and magical way.

The second was last year’s Angel of History, a site specific work we staged in a house in Val Verde.  Because of the site-specific nature of the production, Emily wanted to avoid using theatrical sound and lighting equipment.  My assistant Carrie Jones built a set of six AM radio transmitters and we buried battery operated AM radios in the ground outside the house. In the fourth act, these were unearthed by the actors after the audience was led outside the house. They started out playing nothing but ambient  static. Suddenly in the fifth act, they all started playing ghostly music.  While the audience was outside, speakers were preset in the windows of the house, turning the house into a character that recited the final poem in the play.

Sound design for television and movies may be better paying, but the sonic experience is mostly two dimensional with limited practical use for surround sound besides special effects. Why look behind you or to the side in a movie theater when you hear sound there? There’s nothing to to see. But in the moments I mentioned above, the audience is suddenly immersed in a new sonic reality: an actor you’ve been in the room with changes her costume and is transformed, not only by sight but by sound; a physical structure you spent the evening in can suddenly speak.  These are memorable moments of live theater that remind me why I will always prefer the stage to the screen, and I’m proud that they’re moments I helped create.

> “Beginner Medley” is from Beginner, written by former Dean of the CalArts School of Theater Erik Ehn, directed by Emily Mendelsohn and was performed at CalArts in Spring 2008: