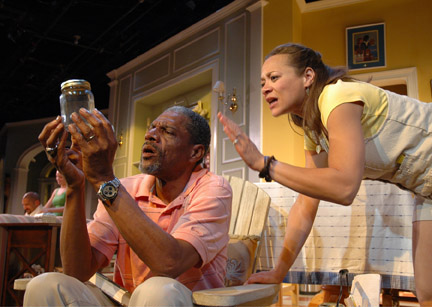 The LA Stage Alliance’s Ovation Awards ceremony, which honored the best in LA’s local theater scene for the 2008-09 season,  took place at the Redondo Beach Performing Arts Center on Monday night, and * four CalArtians were among the 29 winners.

In a recent interview with Ovation Award nominees for the LA Stage Blog, Armstrong waxes rhapsodic about LA’s theater scene:

What do you love most about theatre in Los Angeles?

It’s raw and ready and the building blocks are right there at your feet. Other places are imitations of other places or museums of themselves, but L.A. is still unmade. It’s still frontier. Its culture is alive as it’s built and torn down and built again. I saw Poor Dog’s “The Internationalists” last week and got so stoked I had to hang around the theatre for awhile before I could leave. It’s made out of punk scraps and pencil shavings and booze and is its own ecstatic truth. Like it or not, there it is. L.A. has that sh*t by the gallon, in as many different forms and styles as you can think of, if you bother to look. We have an edge here that doesn’t quite exist in the same way anywhere else because we recreate the whole scene every time. Every show I see in L.A. is L.A. theatre. No matter how I feel about it, it all belongs. It’s a mad beautiful freedom. And sometimes it hurts like hell, but I wouldn’t trade it for anything. The gift of being in the E pluribus unum pilot’s seat on a giddy little ditty into the absolute unknown, just dancing, right out there on the tip of it all? That’s just rad.