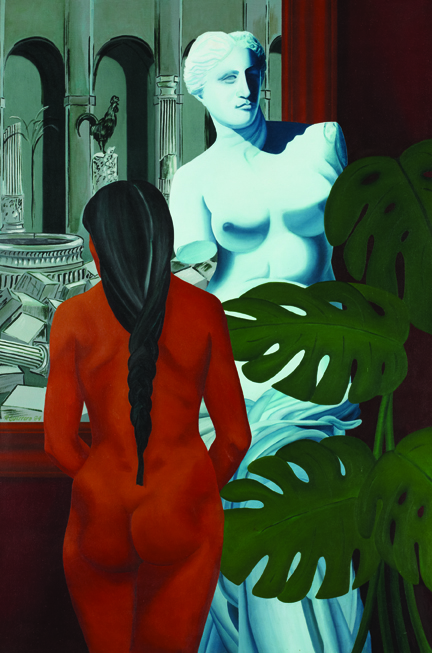 Guerrero, a 1970 Chouinard Art Institute graduate, is a San Diego-based artist who grew up in National City, about 12 miles north of Tijuana, Mexico. The Southern California lifestyle combined with his family’s weekly visits to Mexico introduced him to both the Mexican folk arts and crafts as well as the kitsch aimed at tourists. The combination of these two cultures would influence Guerrero’s career.

The exhibit at the CUE Foundation, which was curated by fellow Chouinard classmate Allen Ruppersberg, focuses on Guerrero’s works from the mid-80s, and elements of pop culture are evident.

In the Curator’s Statement, Ruppersberg provides notes on the paintings selected for the exhibit:

When I decided to nominate Raul Guerrero for a slot on CUE Art Foundation’s exhibition program, I suggested showing his series of paintings begun in 1984 in Oaxaca, Mexico, because I had never quite forgotten them. They were his first foray into painting and have remained unique–at least to me–throughout his subsequent career, which has mostly focused on painting, and in particular, painting a sense of place. This series had never, to my knowledge been shown together, but had been painted as a group and in a consistent and original style. That style might be defined as primitive but not naïve, with a touch of magic realism from the time and incorporating a narrative feeling of space coming from his sculptural tableaus of the past. The elements that made the sculptural environments stand out had passed into the paintings.

His current work has grown into something more sophisticated or knowledgeable most would say, myself included, but I am also still thoroughly attracted to those first efforts. I selfishly wanted to see them all together at least one time.