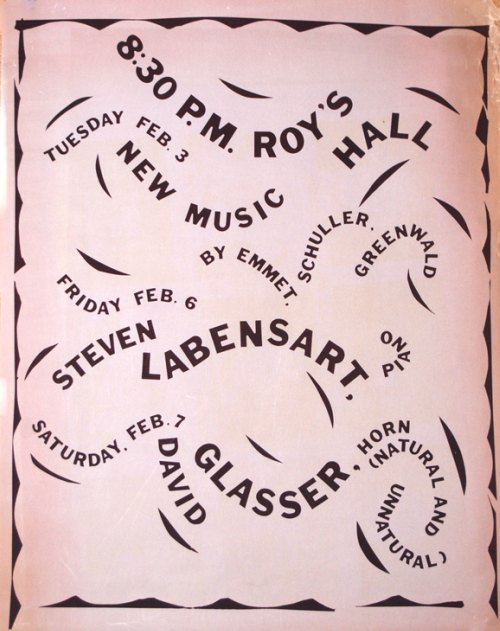 Back in the day, the ROD was called Roy's Hall | Image from Scott Fessler's collection

A few weeks ago, 24700 was sent a link to Scott Fessler’s (Music BFA 76)  blog that showcases his collection of CalArts posters from 1975-76. We conversed with him via e-mail about his time at CalArts:

SF: I loved being at CalArts.  After spending two years at the much more narrowly focused New England Conservatory (NEC) in Boston, I really enjoyed being in the middle of and having access to all of the other kinds of creative work that I saw everyday at CalArts, even if the school was in the middle of cow pastures at the time. Of course, with all of the performances, lectures, shows and other assorted events, there was a plethora of posters as advertisements, and, again, compared to the rather straight-laced posters I was used to at NEC, the CalArts posters seemed so much more creative and fun, kind of an art form unto themselves. So I began collecting them. I think my original plan was to use them to paper some future wall. Unfortunately, that opportunity never arrived. Or, perhaps it did, in the form of the my Facebook “wall.”

Last spring, I began cleaning out my basement, and ran across a forgotten box filled with the CalArts posters, all rolled up and in various degrees of deterioration (although, remarkably, many still smelling quite strongly of the ozalid process used to print them). I figured the time was now or never to do something with them, as it seemed unlikely that they would survive for too much longer. Posterous had launched recently and offered a really simple and clean way to post image files and automatically cross-post them to Facebook and Twitter, so I started putting the pictures up last May. There is quite a sizeable mid-1970s CalArts community on Facebook, and I thought some of those folks might enjoy seeing these relics of our youth. Otherwise, they’re just there for posterity, no pun intended.

Initially, I was scanning the posters, piecing together scanned segments in Photoshop when the posters were too large to scan all at once. When I got to the posters that were simply much too large to scan at all, I began to photograph them, again cleaning them up in Photoshop. I haven’t posted any lately, because I need some time to take more photos and do the editing, but there are still quite a few left. It will probably be sometime this Spring before I get back to it.

27400: Are all the posters on the CalArts poster blog from your own personal collection? Or have people been sending you images, too?

SF: So far, all of the posters but one (from alum Bob Frazier) are from my collection. It would be wonderful to have other folks get involved if they have some posters, too.

SF: I was at CalArts for my junior and senior years, from 1974-76, when I graduated with a BFA in Music Performance. I was still a trumpet major, but I was more interested in music composition. I decided to go to CalArts in the first place because I wanted to study electronic music composition with Mort Subotnick. After graduating, I moved back to my family home in Connecticut, but returned to CalArts to begin a masters program in composition. I was only in the program for one semester, though. Ironically, my composition teacher thought I would do well studying with his former composition teacher who was on the faculty at– wait for it–New England Conservatory. So, back I went to NEC, graduating with a masters in composition in 1979.

24700: Do you have any fond memories from CalArts that you’d care to share?

SF: As I stated earlier, I really enjoyed my time at CalArts, so I have lots of fond memories. Of course, as important as the educational side of the school was to me, the most important aspect involved the many social interactions: making friends, getting to know teachers–and especially, meeting the woman who would become my wife. Amy (Music BFA 77) and I arrived at CalArts at the same time, both as transfer music students going into our junior year. After graduation, she joined me in Boston and we’ve been in the Boston area ever since. Last summer, we celebrated our 28th wedding anniversary; our daughter, a cellist, is studying music at a local university. It seems we’ve come full circle.

Oh, and one other thing. I used to really enjoy riding my bike through the maze of the CalArts physical plant, winding up pedaling madly through the main Gallery on the way to the Music School. Good times. I’m just glad I never hurt anyone.  And I would kill for a Tommy’s chili dog. More likely, it would kill me!

And the last thing: I remember the midnight performance in “Roy’s Hall” of Messiaen’s “Quatuor pour la fin du temps” by Tashi. Stunning. No one made a sound for several minutes following the final notes. Or, at least that’s how I remember it.