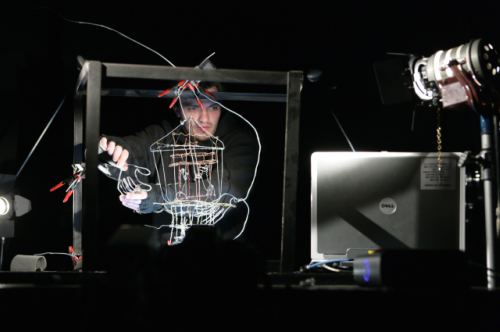 Deux Regard explores “the interstice between materiality and immateriality, where direct work on the filmstrip is digitally rendered to create tension between surface and depth,” say the filmmakers.

Visit is a solo effort by Kang Min Kim chronicling a phantasmagorical journey through a city. For Kim’s protagonist, “the city is sinking in a dream, with flicking segments of real life and illusion,” he says. “The only lighthouse he has is his memory.”

Over the River and Through the Higher Dimension is Dillon Markey’s whimsical exploration of the nature of the universe as it is becoming understood in cosmology today. The film, Markey’s thesis project at CalArts, uses live action and a variety of animation techniques, including stop-motion wire sculpture, an Etch-a-Sketch animator, CGI and a full-size stop-motion cast “puppet” of Markey’s own head. In the story, Markey is given a teleportation device by his grandmother and travels to the farthest reaches of the cosmos, with the puppet representing Markey’s dimension-crossing self.