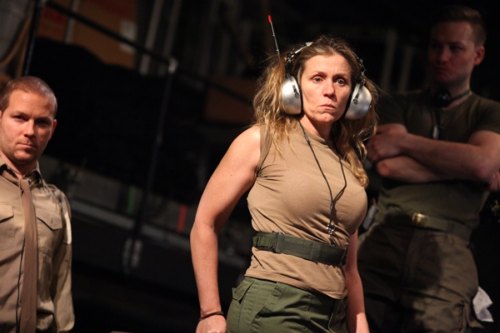 The Wooster Group, a New York-based, world-renowned experimental theater company, opens for an 11-day run at REDCAT tonight with its latest production, North Atlantic. Written specifically for the Group by James Strahs in 1982, North Atlantic is a satiric (and at times, musical) inquiry into the role of the military and technology in America during the latter days of the Cold War.

The story is set on an aircraft carrier in the North Atlantic and follows the cultural and sexual dynamics that arise between members of the international peacekeeping force on board. Directed by Elizabeth LeCompte, the production features performances by Frances McDormand and Maura Tierney alongside veteran Wooster Group members. (This is McDormand’s second Wooster Group show; her first was 2002’s To You, the Birdie!)

If past performances are any guide, it could be a bracing night on the boards. Blending caustic dialogue, retro-1980s gadgetry and unexpected snatches of classic musical theater, the show tells the story of an American aircraft carrier during the Cold War. Forget the heroic wartime motion pictures you’ve seen: This is an edgy, claustrophobic world where overheated military jargon, sarcastic doubletalk and smoldering sexual tensions between men and women collide.

This multimedia approach is a key element in “North Atlantic,” which will feature new video material for its Los Angeles premiere. The set includes a military command desk tilted toward the audience at a 45-degree angle, plus TV screens and a profusion of 1980s electronic gadgetry, including reel-to-reel tape machines and turntables.

Throughout the show’s run, the cast and crew are working with students from CalArts’ School of Theater to illuminate the backstage and onstage development of a highly anticipated production.

In addition to open rehearsals for theater students, Wooster Group’s Jennifer Tipton (lighting) and Bruce Odland (sound) are meeting with sound and lighting designers from the Institute; company members will hold a post-show discussion with acting and directing students; and producer Cynthia Hedstrom will meet with management students on planning, budgeting, touring, grantwriting–the building blocks of a show.