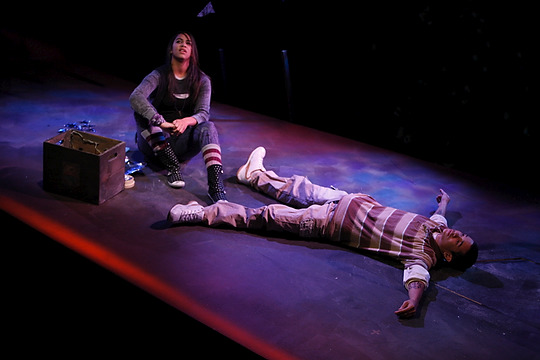 It was announced Feb. 23 that the stage play blu, Virginia Grise’s MFA thesis project at CalArts, was chosen by English playwright David Hare (The Vertical Hour, Amy’s View) as the 2010 winner of the Yale Drama Series competition. For her efforts, Grise will be awarded the David C. Horn Prize of $10,000, and blu will be published by Yale University Press and receive a reading at Yale Repertory Theatre in New Haven in September.

Grise (Theater MFA 09), a native of San Antonio, Texas, is  a Chicana cultural worker, writer, performer and teacher. She’s currently based in St. Paul, Minn., where she’s been awarded a 2009-10 Jerome Fellowship from The Playwright’s Center.

Selected from 960 submissions, blu focuses on a Mexican American family’s response to the loss of their eldest son in Iraq. In the announcement, Hare called Grise “blazingly talented” and her writing “resonant” and said that, “the play stays with you long after you’ve read it.”

In an e-mail statement following the announcement, Grise wrote: “A special thank you to Jon Lawrence Rivera who directed the play as part of my MFA thesis project at CalArts and Carl Hancock Rux who tirelessly mentored me through the process of playwriting.” Hancock Rux, the former head of Writing for Performance at CalArts, also directed the most recent reading of blu at the New York Theatre Workshop.

We followed up by phone with Grise a few days after her win to ask her about the play. “blu is the first play I ever wrote,” she said. “It started as six stacks of poems and Carl [Hancock Rux] helped me develop them into a play through a three-year process.”

Grise told us that there’s an Aztec myth about the god of war and god of the moon–brother and sister–that’s central to the play. It examines how the death of a son affects a family that’s being raised by two women, and how they raise the next generation.

“The play is not just a commentary on war, it’s about masculinity and what we are teaching our children.”

The photos posted above from the 2008 staging of blu at CalArts.

We also spoke to her last year on the DVD release of The Panza Monologues, a  solo performance piece based on stories, conversations and chisme (gossip) from the Latina community.