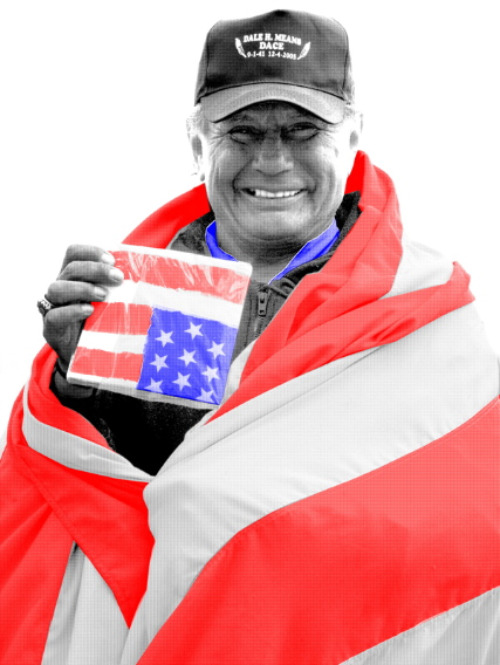 Activist Russell Means has been working tirelessly for more than 40 years to call attention to the plight of Native Americans. He’ll be giving a lecture at CalArts on Thursday (March 4) as part of MFA photography student Sage Paisner’s gallery show, This Does Not Belong to You.

Leader of A.I.M. (American Indian Movement) and its political protests throughout the 1960s and 70s, Means directed controversial takeovers of Alcatraz Island (for 18 months), Mt. Rushmore, the Bureau of Indian Affairs in Washington, D.C., and a 71-day occupation of the hallowed ground at  Wounded Knee. In an act that was part satire and part political statement, Means ran as a vice presidential running mate to to Larry Flynt in 1984.

Once described by the Los Angeles Times as “the most famous American Indian since Sitting Bull and Crazy Horse,” Means has also been a figure of artistic and cultural renown. His portrait was painted 18 times by pop artist Andy Warhol in Warhol’s 1976 American Indian Series. Means is also a printmaker and painter, best known for his lithographic series Indian Killers (2004).

Means and members of his family are among the subjects of Paisner’s exhibition, which also includes other photos of American Indian Movement leaders at Alcatraz, in the Black Hills and on the Pine Ridge and Navajo reservations.

Like 19th century photographers, Paisner uses a large-format camera to create his work, but unlike photographers who were known to use wigs and costumes on subjects to reflect romanticized notions of American Indians, Paisner photographs these family friends who reveal their Indian culture and authenticity on their own terms.