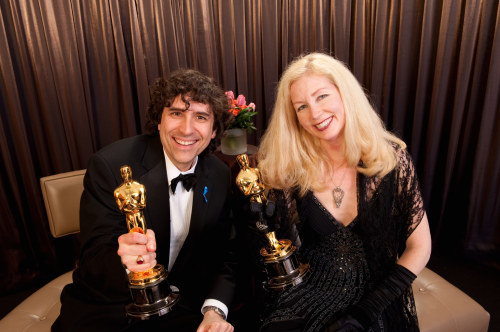 At Sunday’s Academy Awards ceremony at the Kodak Theatre in Hollywood, there were a number of CalArts alumni among the nominees, and two eventual winners: Pete Docter (Film/Video BFA 90), who directed the winning Animated Feature Film Up, and Chris Innis (Film/Video MFA 91), who, with her husband Bob Murawski, won Oscars for editing The Hurt Locker .

During the backstage interviews with winners, Docter was asked about any pressure from Pixar for filmmakers to out-do previous releases. He said that while there was a little “sibling rivalry” between filmmakers, the Pixar system is a supportive and creative environment. 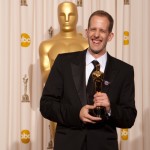 “I get to use Brad Bird and John Lasseter and Andrew Stanton [all CalArts alumni] and all these amazing filmmakers who sit and watch what I’m doing and give comments and suggestions.  And if they’re great ideas, I get to take credit for them.  And if I don’t like them, I don’t have to take them,” Docter said. “So it’s very unique and amazing, and I think that contributes to what we do.  But there’s not really like, ‘I had to top this last guy.’ Thankfully.”

Winners Innis and Murawski were asked backstage about the complexity of editing The Hurt Locker and working with director Kathryn Bigelow on the project. (Bigelow, now the first woman to win an Academy Award for directing, actually taught for a semester at CalArts’ School of Art in the early 80s at the invitation of John Baldessari.)

“We had over 200 hours of footage, and we got a chance to do our first pass, and then Kathryn came in and gave us notes from there to get things tighter, but we had a lot of freedom with our cuts,” said Innis “So, a lot of those choices you see up on screen were things we figured out how to do.”

They—along with Docter–obviously figured out how to do those things quite well, and CalArts again congratulates them on their Oscar-worthy achievements.