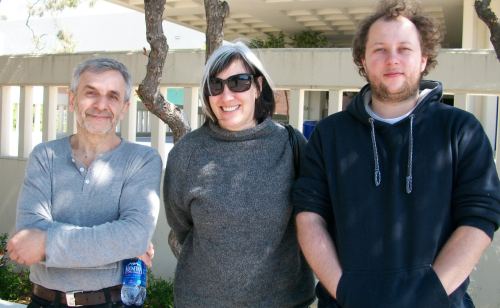 Rosanna Gamson, founder of the LA-based, dance-theater company Rosanna Gamson/World Wide and faculty member of The Sharon Disney Lund School of Dance, brings Tov to the REDCAT stage this week.

Gamson collaborated with Tomasz Rodowicz, artistic director of the CHOREA Theatre Association, based in Lodz, Poland, for the production. 24700 caught up with both of them and CHOREA music director Tomasz Krzyzanowski on Friday after a master class at CalArts to discuss the project.

Tov (which means “good” in Hebrew) is an allegory framed by two disparate stories: the drama of the tarpan–an extinct species of Eurasian wild horse that was “recreated” and “re-engineered”  in the 1930s through selective breeding–and the fate of Polish Jewry during the same time period. In this personal work, Gamson has included fictionalized reflections of her own ancestors, who were Polish-Jewish horse traders from Szczecin. The dance/theater piece is ultimately about positive and negative space–how the existence of good defines evil.

On a recommendation, Gamson traveled to Poland last year to train with Rodowicz, but didn’t think about collaboration from the outset. “I wanted to see how he worked first,” Gamson said. “I didn’t want to get married before the first date.”

Rodowicz’s philosophy breaks down the rules and roles of a typical dance piece.  “As a trainer, I believe that you are a total performer–a singer, dancer, actor. You’re everything,” he said.

Gamson added that this approach to performance was both appealing and challenging. She said she had no problem with tackling intense dance moves or flying through the air, but when it came down to singing, she felt out of her element. “Pitch was the final frontier.”

But it was this kind of all-around experience that Gamson wanted to use to tell the story of Tov. The production features a vocal score created by CHOREA and performed by 14 American and three Polish performers. The music is a mix of new melodies and arrangements of traditional material. Expect physical movement with text spoken and sung in Hebrew, Polish, English, Yiddish, Bulgarian and German. “We wanted to awake the voice of the dancers,” said Krzyzanowski.

Tov was featured as a work-in-progress during REDCAT’s 2008 New Original Work Festival (see video clip below) and now returns for its world premiere March 18-27.

Tov
at REDCAT
March 18-27
Tickets $20-25, $16-20 for students and $10-12 for CalArts students, faculty and staff
Check the schedule for detailed performance times, prices and days.