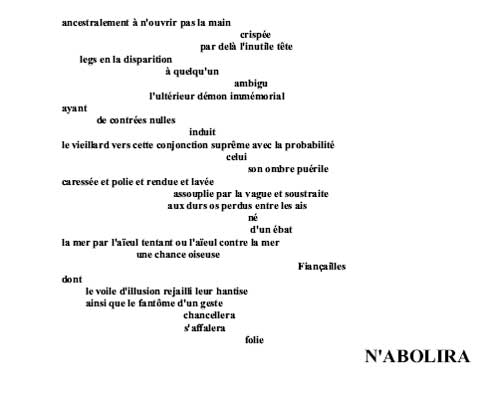 And, as the title suggests, there is an element of chance with each performance.

The opera is ordered according to selections drawn by a computer program, with set parameters. As a result, each performance is different from the next. Singers may sing in French during one part of the opera, and English the next. Dancers may switch routines from one performance to the next. The same goes for the lighting, costumes, music, staging and video projections that will be included in the production. Both performers and the crew–along with the audience–will be kept on their toes.

“Anyone who comes will create their own opera and bring their own experience to Dice Thrown,” said King, before speaking at a CalArts theater class on Friday. “They might come back a second night and see something different.”

“To me, the excitement is that the audience has to engage with the work.”

Dice Thrown is based on the visual poem “Un coup de dés jamais n’abolira le hasard” by Stéphane Mallarmé which loosely translates as “A throw of the dice will never abolish chance.” But the Mallarmé work is a poem that should be seen and experienced, not just recited, and he took the poet’s intentions to heart when creating the opera.

“[The poem’s text] is 11 pages done in landscape with different font sizes and types,” said King . “He wanted the eye to move around, and the title of the poem is spaced throughout. The sounds are just as important as the meaning,” he added.

When we asked what it was like to be back on campus, King fondly recalls his studies with faculty members like Morton Subotnick, Barry Schrader and Harold Budd, among others. “It’s the same energy and vibe in the hallways.”

An excerpt of Dice Thrown was performed with full orchestra by New York City Opera as part of its competitive VOX series in May 2008. Here is an audio clip featuring soprano Melissa Fogarty.