Last Friday Ulrich Kreiger and Clay Chaplin, both faculty members of The Herb Alpert School of Music at CalArts, took over the CalArts’ pool for a performance of Krieger’s sound composition Aquacoustica. While Chaplin stayed topside manning the computer and sound board, Krieger–a certified scuba diver–donned his gear and got into the pool.

The one hour and 10-minute performance included Krieger playing cymbals, metal plates, Chinese stress balls, a Tupperware box and even a plastic didgeridoo–underwater. (Watch the video posted above for clips.)

After the performance, 24700 caught up with a dry Krieger, a classically trained saxophone player and composer, about Aquacoustica.

“I’ve been scuba diving for about 10 years and interested in sounds underwater,” said Krieger. “I teach a course here [at CalArts] on acoustics and applied physics for musicians.”

He proceeded to give us a quick lesson on underwater acoustics: “People have no directional hearing underwater,” he said, explaining further that divers never know where a sound is coming from, but that it travels four times faster in water than above ground.

The project started in Krieger’s native Berlin around 2004. “There was an indoor salt water swimming pool that had speakers built into the pool. The swimmers could float and listen to music–except that it was this really horrible new age music.” He was inspired to create a piece for that pool, but it was closed down a month prior to Krieger’s scheduled performance.

Fast forward to last Friday, and he and Chaplin, after a few rehearsals and test runs, sonified the pool with hydrophones popular with marine biologists and the Discovery channel. “Security had a few concerns with the electrical equipment near the pool,” said Krieger.

Although there is a basic score for Aquacoustica, Krieger improvised much of the performance. Playing certain instruments and singing underwater required that he take out the breathing apparatus, which was a little tricky at times.  “You have to remind yourself that you’re underwater,” he said. “Put the apparatus back in before breathing.”

While this was Krieger’s first scuba performance, it’s not the first music performance at the CalArts pool. Here’s an archival photograph of an early 1970s  Max Neuhaus sound performance in the pool. 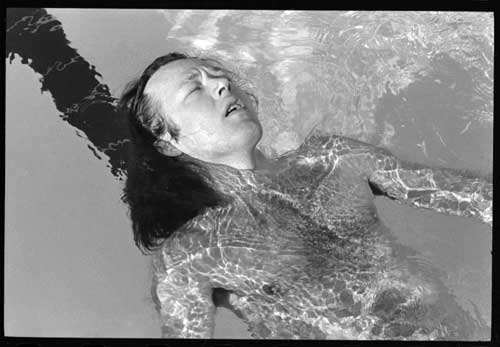 From a Max Neuhaus sound performance in the CalArts pool.