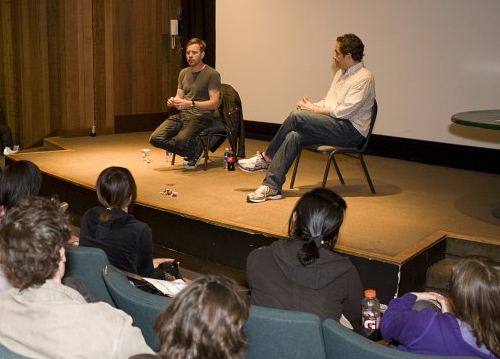 In the 1996 film Trainspotting, McGregor portrayed a hard-to-forget heroin addict. Three years later, he took on the iconic role of Obi-Wan Kenobi in George Lucas’ Star Wars prequels. In his most recent cinematic release (see trailer above), he plays opposite Pierce Brosnan in Roman Polanski’s The Ghost Writer. And no stranger to the boards, McGregor returned to the London stage in 2007 as Iago in Othello.

On Friday afternoon, McGregor added another role to his repertoire–one of visiting artist for the schools of Film/Video and Theater at CalArts. Before a packed house at the Institute’s Bijou Theater, composed mostly of acting, directing and animation students, he was quizzed by friend and Film/Video faculty member Jon Reiss on his career choices, the artistic process and integrity, and about working collaboratively with other actors and directors.

McGregor told the rapt audience about growing up in a rural farming area of Scotland, his restless youth, and leaving school at 16 to work as a stagehand in local theater before formal training at a performing arts school. His theater training was hands-on and comprehensive, working all the roles in smaller theaters, from stage managing to public relations, and of course, acting. “I was always watching and working with actors, especially during technical rehearsals,” he said. “It was at the theater that I started living and learning about life a bit.”

Although he’s acted in several blockbuster Hollywood movies, McGregor described his career path as one of the middle ground, doing mostly “expensive independent films” of around $20 million. “It’s this middle ground that disappeared a little bit [because of the recent economic woes.]”

He waxed poetic on the indie world, telling the students that there was something special about the camaraderie and relationships built during  film shoots on a shoestring budget. “Independent filmmaking tends to be the area where we can make the loudest statements,” he said “Because often times it’s not all about making the [studio’s] money back.”

McGregor’s lecture lasted for about three hours, including answering a number of questions from the students in the audience. Here are a few snippets of advice from McGregor: