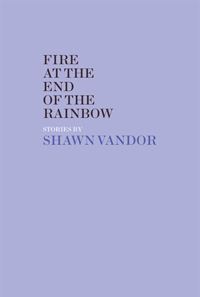 Last month, the David Kordansky Gallery in Los Angeles held a book launch and reading for the 2010 releases for Sand Paper Press, which includes Fire at the End of the Rainbow by CalArts alumnus Shawn Vandor (Critical Studies MFA 04).

His book is a collection of  two dozen autobiographical short stories, revolving around “lust gone awry, paeans to prostitutes, drug use, and sphincter failure; and strange encounters in the homes of Hollywood and Harvard stars.”

Here’s how Vandor describes meeting actor Michael Madsen (from Reservoir Dogs) for the first time in the story “Man of the House II”:

As a man who is six-foot-eight and somewhere in the two-hundred-and-forty pound range I am very rarely in the company of another man whose size is impressive to me, let alone outright intimidating. Michael Madsen’s was both. But it wasn’t just his size or his status as a film actor of some notoriety that was so intimidating; it was his demeanor, his gait. It was clear that this was a man with whom you could not reason. He lumbered from the sliding glass door to his seat at the head of the table like a gorilla might lumber through the morning grass. He dropped his enormous form onto the seat…The dining room remained silent for what seemed like two minutes. No one dared say a word.

Vandor, who now calls Portland, Ore., home, says that Fire at the End of the Rainbow is a “painfully intimate memoir. I picked events or thoughts that were extreme. It’s a little bit in your face, awkward and hopefully funny.” He mentions Larry David’s TV show Curb Your Enthusiasm, in which David walks the middle ground between real life and fiction to often cringe-worthy results, as an inspiration for the book.

Fire at the End of the Rainbow is Vandor’s first book, and he says that the process of writing these short stories helped him avoid writing another book: a larger, more complicated project that began as his thesis project at CalArts. Vandor, was a “product” of donor insemination. His next book tackles the subject from a personal, research and historical perspective.

Vandor reads from Fire at the End of the Rainbow in Portland, Ore., tonight.