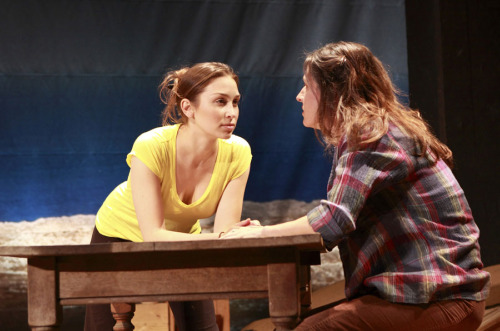 Two CalArts School of Theater graduates Olivia Henry (Theater BFA 08) and Alina Phelan (Theater BFA 95) star in the Circle X Theatre Co.’s production of Lascivious Something, written by Sheila Callaghan and directed by Paul Willis. It opens at [Inside] the Ford tomorrow night (March 27) in Los Angeles for a six-week run.

Inspired by Greek tragedy, Callaghan’s play is set on a desolate Greek island in the early 1980s, at the precipice of the Reagan era. An American ex-pat (Silas Weir Mitchell) pursues his passions for winemaking and his attractive young wife (Henry) on the island. An old lover (Phelan) shows up at their doorstep the night before the first harvest, bringing with her a “wild and violent past.”

The play combines well-developed characters and storylines within the context of  larger political and social themes. Here’s a sample of dialogue, crafted by Callaghan for the young wife:

…And then you felt a wet drop on your closed lids, and you opened them and he was crying into your eyes. And he said you are so beautiful Liza, you are so beautiful you could crack the sky open. And you said August you are like the universe, you are so big you fill me you fill my ears and you fill me. He brought his head down to yours and unrolled his tongue into your mouth. And his fingers wound around your hair. And you grabbed his hip with your hand and you said the word NEED, and you wrapped your thick leg around his skinny leg and said the word NEED, and then you sank your teeth into his hip and bit so hard you came back with part of him in your mouth. And then you made love. And you fell asleep. And when you woke up you had a red smear on your face where you fell asleep in his blood. But he was gone.

Lascivious Something is the final production of the 2009-10 Season at [Inside] the Ford, a three-play, curated series of new works from three LA-based theater companies.

Lascivious Something
[Inside] the Ford (the 87-seat indoor theater in the Ford Theatres complex)
2580 Cahuenga Blvd. East, Los Angeles
March 27-May 1
Thursdays-Saturdays at 8 pm, Sundays at 2 and 7 pm
Tickets $20, students and seniors with ID: $12