How to Train Your Dragon is the latest animated feature from DreamWorks Animation, which opened on Friday to great reviews. Directed by CalArts grad Chris Sanders (Film/Video BFA 84) and Dean DeBlois, the movie tells the story of Hiccup, a young Viking lad who wants no more than to be accepted by his father and his community. But to make that transition, he has to do one thing: kill a dragon.

Things change when Hiccup encounters a wounded dragon in the woods. Hiccup has been raised to believe that dragons are the mortal enemies of the Vikings, and are to be terminated with extreme prejudice whenever the opportunity presents itself. Yet when faced with an ideal situation to assert his Viking-hood and slay a deadly beast that is temporarily defenseless, he wavers.

It’s a life-changing moment, as Hiccup realizes it’s not within his nature to kill another being. That quickly dawning, daunting self-awareness will affect forever his relationship with everyone he knows.

The story has heart, but it also has spectacular animation, offered to audiences in both 2-D and 3-D formats.

CalArts faculty Morgan Kelly (Film/Video BFA 03) worked with fellow character animation faculty members James Hull and Scott Wright, to animate the film. “I was working as a character animator on this film for most of 2009,” he said during a quick telephone interview on Friday. “I mostly worked on Gobber [a Viking blacksmith voiced by Late Late Show host Craig Ferguson] who’s missing limbs and bounced around on other characters.”

How to Train Your Dragon is a 3-D feature, and Kelly believes that this time around, the third dimension on film is more than just a passing fancy. “It’s not being used as a novelty,” he said. “But it helps amplify the experience.” He credits the technology as now allowing filmmakers the ability to differentiate between levels of 3-D, and not bombarding audiences with full-throttle visual effects for 90 minutes at a a stretch.

Despite all the computer-assisted work in animation, the art still begins with an idea and pencil and paper. There are things that are still better off learned manually, Kelly says, like drawing anatomy and learning how to create silhouettes.

“I don’t feel like it’s too different for us. I still draw on paper, though most of the rendering is now done on computer.”

Kelly started at DreamWorks the fall after graduating from CalArts, first working on Shrek 2, and has been with the company ever since. We asked if he felt any particular rivalry between DreamWorks and Pixar.

He was diplomatic–at first: “All the studios are connected, so we are aware of what the others are doing. We’re just  always excited to see good work…But I feel really confident that we are going to blow them away at next year’s Oscars!” 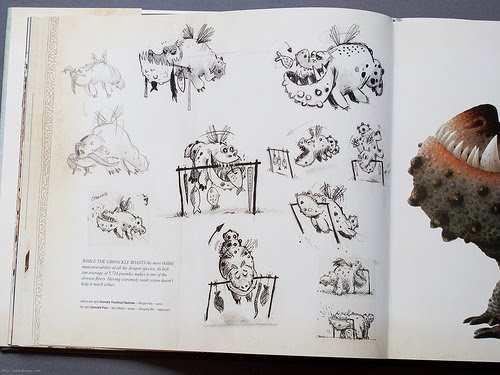 A page of sketches Morgan Kelly did for 'Gronckle' dragon, included in a book on the film's art.