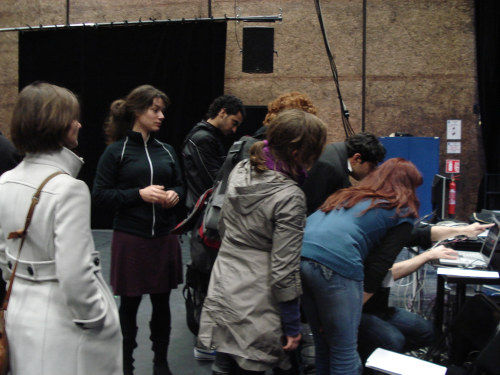 Feldstarke participants with an artist from IRCAM (a music and science institute) in Paris.

Ed. Note:  Feldstärke International is a project that fosters an international collaboration among artists from several performing/visual arts schools and organizations. In February, we chronicled the art created by two CalArts’ students and their peers during the week-long program in Essen, Germany. For the latest Feldstärke program week (March 28-April 3), students traveled to Paris for another intensive learning and art-creation session. We asked one of CalArts’ participants, composer Ellen Reid (Music MFA 11) to share her thoughts and experiences as the week progresses. She sent us this dispatch of notes and photos on Wednesday.

Feldstärke began two nights ago. The residency is being held at 104, a new art center that focuses on developing art–the process and not the product. While 104 only opened in 2008, it has already made quite a name for itself in the international arts community. It’s mainly funded by public money, but about 30 percent of its budget is from private donors and companies.

104 is located in the 19th district of Paris, which is known for its ethnic diversity and cutting-edge art venues and bars (similar to Echo Park in Los Angeles). There are canals that run near 104, and parks like Butte Chaumont, which are simply stunning. The city of Paris has spent a lot of energy revamping this area. In its former life, 104 was a place where coffins were made and hearses were stored for the entire city of Paris. (No corpses were kept here.)

Yesterday (Tuesday) my seven-person group saw an interesting presentation from IRCAM, the Institute for Research and Coordination Acoustic/Music, one of the world’s largest public research centers for both musical expression and scientific research. We also took some time to walk around and explore this neighborhood of Paris, including an abandoned elevated train track.

So for our Feldstärke project, my group (a percussionist, video artist, and photographer from France, and a musician, photographer and puppeteer from Turkey and myself) have decided to investigate what remains when people make art.

Now we’re going to the artists’ studios. Luckily, the artists in residence here were agreeable to our visit. We’ll speak with them, look at the trash (physical trash and the trash from their computers) and discover what we can about the process of creating.

Stay tuned for the next Feldstärke dispatch.