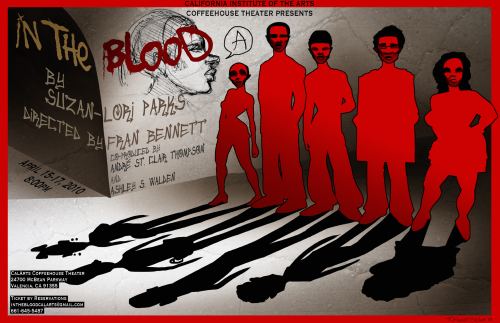 Suzan-Lori Parks' In the Blood at CalArts

In the Blood, which first premiered in 1999, is playwright Suzan-Lori Parks’ first take on Nathaniel Hawthorne’s The Scarlet Letter. The play follows Hester, La Negrita, an illiterate mother of five fatherless children as she struggles against the odds to help her children escape the cycle of poverty, helplessness and homelessness.

The play is being mounted at CalArts Coffeehouse Theater this weekend (April 15-17).

Like Hawthorne’s protagonist, Hester’s been branded a hussy–and her prospects grow dim as the people and institutions designed to help the situation either are indifferent to–or exacerbate–the predicament. But despite her lot in life, Hester’s children remain her “treasures.”

In the opening scene, the audience sees that slut has been scrawled on the wall, under the bridge where they live. Her eldest son, Jabber, refuses to tell his mother what the word says. This snippet from Park’s play plainly lays out Hester’s predicament:

They slurp down their soup quickly.
As soon as she fills their bowls, theyre empty again.
The kids eat. Hester doesnt.

Hester
You did a good job with the wall, Jabber. Whatd that word say anyway?

The soup pot is empty.

The play calls attention to the systems in place–e.g., education and welfare–that fail time and time again. In the 1999 New York Times review of the play, Margot Jefferson writes, ”In the Blood‘ is about the way we live now, and it is truly harrowing. (What is ‘in’ Hester’s blood, as the world sees it? Sin, sluttishness, the lower-class racial weakness that leads to sloth and reckless procreation.) We cannot turn away, and we do not want to.”

This particular CalArts’ production of In the Blood not only examines the aforementioned issues, but it also highlights the talents of the Institute’s Black actors, and has been a labor of love for this largely African American cast and production team.  Says co-producer Ashley S. Walden (Theater MFA 11), “CalArts Voice instructor Fran Bennett, who directs, has worked with the ensemble since December to develop these characters and the world in which they live.”

In the Blood
@CalArts Coffeehouse Theater
24700 McBean Parkway, ValenciaApril 15-17 at 8 pm
Reservations: inthebloodcalarts@gmail.com or by phone at 661.645.5487
Free