The Tribeca Film Festival started Wednesday and runs through May 2. One of the films being screened is Dustin Thompson’s (Film/Video MFA 09) experimental film The Travelogues (2009, 49 mins.). It’s a series of short films that allows viewers to experience the wanderlust–and an abstract understanding of the world–from an unseen traveler’s perspective. Jon Gartenberg, experimental film programmer for the Tribeca Festival, writes of Thompson’s film:

In The Travelogues, Dustin Thompson creates a more personal story. He travels with his film camera across two continents and compiles a series of mini-narratives, suggestive of loves gained and lost. He generates lyrical images, shot at oblique angles and developed with shifting camera speeds; in each scene, the heightened film grain tends to move the depiction of the natural universe toward abstraction. From the prologue through to the epilogue of his journey, this artist travels a fine line between real and imagined worlds.

LA-based filmmaker Thompson spoke to us from Tribeca to talk about the film, which was his CalArts thesis. He credits his thesis committee members–including James Benning, Adele Horne, Janice Tanaka and Charlotte Pryce–as pivotal mentors in his filmmaking process.

Thompson began shooting autobiographical films in Rome as a post-graduate research project from the University of Virginia, capturing scenes of “cultural and social conversations” in Italy.

“One of the reasons I applied to CalArts was to better understand these critical and philosophical conversations in film,” he said.  “When I got to CalArts, though, I was getting too heady and thinking too much about ways to engage people and narratives.

“Then Betzy Bromberg [filmmaker and CalArts faculty member] hit me over the head,” he said. “She told me: ‘Just go shoot something.'”

So that’s what he did. “I began to figure out different ways of shooting, formats and working with different stock.”

Although The Travelogues is composed of 14 short films, Thompson says that he made about 40-50 short films (“some of them were really awful”), and whittled that number down, creating a certain narrative–a mix between fiction and documentary–for the remaining films.

“The Travelouges went through a lot of rejections, but it’s exciting to have the world premiere at Tribeca.”

We posted the film’s trailer above. If you’re interested in attending a screening of The Travelogues, public screenings will be held: 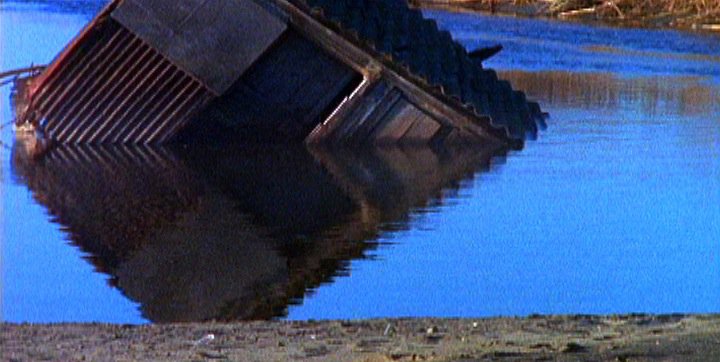 A still image from Dustin Thompson's The Travelogues