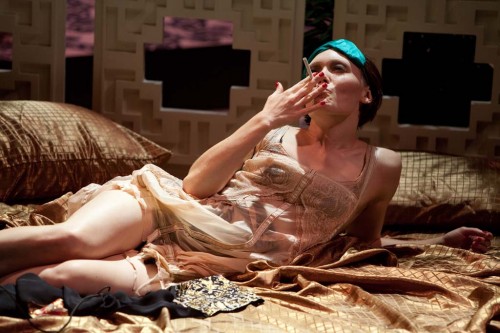 The Bitter Tears of Petra von Kant, best known as  a melodramatic 1972 film by German director-screenwriter-actor Rainer Werner Fassbinder, was originally written for the stage by Fassbinder. This weekend, CalArts School of Theater mounts a production of the work that examines the dynamics of relationships among women, focusing on the tumultuous life of protagonist fashion designer Petra von Kant.

Directed by Zoe Aja Moore, the play is set against the backdrop of a radicalized 1970s Germany. Petra (Sallie Merkel, Theater MFA 11) is a lonely, yet caustic–borderline sadistic–woman who throws herself into a volatile relationship with a much younger woman (Gabriella Rhodeen, Theater BFA 12). The relationship shifts, causing Petra to veer onto a path of self-destruction.

“The Bitter Tears of Petra von Kant examines issues around power, submission and dominance,” said producer Laura Kay Swanson (Music, Theater MFA 11), “The power structures in these female relationships is a reflection of Fassbinder’s life and his view of relationships.”

A 2003 article from The Independent (U.K.) examined the relationship between The Bitter Tears of Petra von Kant and the filmmaker’s own life:

Fassbinder was nothing if not a man who knew how to spin gold from heartache. So blatant is the autobiographical thrust of The Bitter Tears of Petra von Kant, that Robert Katz can without fear of contradiction call it ‘the story, transsexualised into a lesbian love affair, of Rainer’s relationship with [black Bavarian actor Gunther Kauffman].’ Petra is a self-absorbed fashion designer besotted with her doll-faced model, Karin, who responds only with scorn, boredom or material demands. Lamborghinis are not mentioned, but you get the gist. By the end, Petra has trashed her friends, her family and her crockery, all for a woman who barely notices she exists.

The play premiered in Frankfurt in June 1971, when Fassbinder was just 25, and received lukewarm reviews. By the end of January 1972 he had shot a film version that was slavishly faithful to the play with the exception of a final-act divergence which darkened the tenor of the piece. He had addressed the perils of love and cohabitation previously in his maligned play Water Drops on Burning Rocks, which he wrote as a teenager (it was filmed 16 years after his death by François Ozon). But in The Bitter Tears of Petra von Kant, there is a weight of experience and anxiety that was merely cosmetic in the earlier play.

The hard-living Fassbinder’s life and career was ultimately cut short in 1982, when he died from a drug overdose at 37.

Rush tickets may still be available for The Bitter Tears of Petra von Kant, which plays tonight and tomorrow (April 30-May 1), and Monday and Tuesday (May 3-4) at 8 pm in the E407 Ensemble Theater at CalArts.