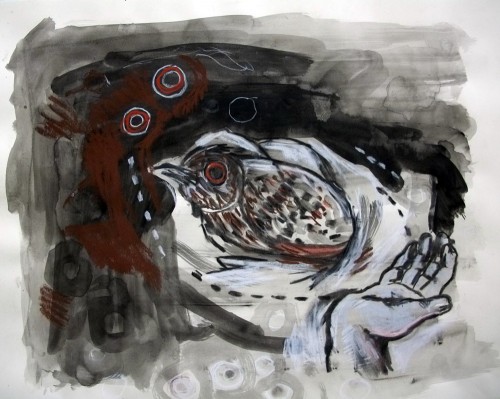 A drawing by Gina Napolitan from the SALT exhibit | Photos: Stuart Frolick

One of the many interesting end-of-semester shows on campus last week, was SALT, an exhibition of drawings that explored among other ideas, the question, “What makes a drawing a drawing?”

The work was produced by eight BFA and MFA students in the School of Film/Video’s Program in Experimental Animation, as well as two others from the School of Art. What was immediately clear in viewing the show was that these drawings were made as part of a process of discovery rather than attempts at technically perfect renderings. The range of materials included traditional medium such as ink and watercolor, as well as fabric, a computer screen and what appears to be a rusty pipe.

“Drawing is a form of writing ,” said instructor Maureen Selwood. “This class is a departure from the Drawing Techniques class I’ve taught for many years. This one emphasizes the unconscious relationship between writing and drawing, and the idea of drawing that does not stem from observation.” Rather than screening animated films, Selwood stressed the importance of research with a field trip to the Getty and weekly workshops with themes such as Drafting and Architecture, Presence and Absence, Drawing and Identity, Travel and Perspective.

“I often have a sculptural object or atmosphere in mind when I draw,” said student Gina Napolitan (Film/Video MFA 12) . “Drawing helps me practice different ways of evoking the qualities I want (colors, textures, etc.) before I commit to working in a more time-intensive medium.”

The title of the show derived from student Yoon-ah Jung (Film/Video MFA 11), who said, “I was using watercolors to make some drawings when suddenly, I had the idea of using salt to create some textures and effects. This came from my meditation on a Bible verse I like, Matthew 5:13: ‘You are the salt of the earth; but if the salt has become tasteless, how can it be made salty again? It is no longer good for anything, except to be thrown out and trampled under foot by men.'”

Selwood pointed out that, “the ocean or water play a part in the work of two other students’ work as well, so it seemed like an appropriate name for the exhibit.”

Student Scott Peters (Film/Video MFA 11) characterized the show (and class) this way: “For me it’s the beginning of a body of work, not an end. However, I am excited that Maureen pushed us to show what went on in the course of the semester. This show is humble, free of showboating or posturing. And for that reason, it’s an accurate reflection of the environment that she creates for students. Personally challenging, nurturing and inspiring.”