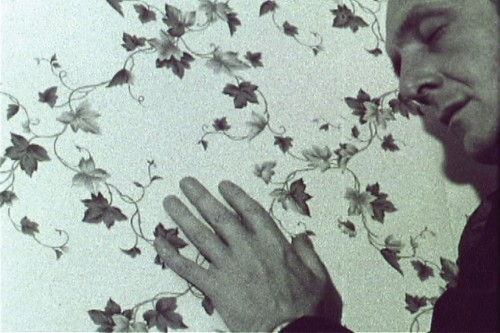 The Dublin-born Murray was originally a visual artist in Ireland, but became involved in the experimental filmmaking scenes of San Francisco and New York after after moving  to the U.S. in 1985. Her film body of work includes more than 20 short experimental films, as well as a number of collaborative performances and installations with other artists.

In her films, Murray combines both found and original footage to create ambiguous and paradoxical universes. Despite the array of images, notes one Los Angeles Times writer, the patchwork of ensuing visuals and non-narratives “manage to stay rhythmically and visually compelling.”

There are seven films in tonight’s program, including Deliquium (2004), 16mm, sound, 15 mins., which is structurally closely related to a poem. Here’s how Murray describes the film:

Hidden among the pounding of animal hides,
All tamped into maps, their shapes
Explicit replicate butterfly wings, lie the motives of Lír.
The king who paid improper attention to his children.
From that first fascination
And it’s lascivious gaze,
Came the gorged desire for substance,
Among the skins,
Nets, shadows and milk bottles
Pried from the stomachs of metal fish,
Steam, smoke and things that won’t stay,
Speared, dangled, measured, divined.
All dreamed through wallpaper,
Or dowsed from something they drowned in long ago.

Snowed in on either side,
The swans,
Lír’s beloved children,
Begin their 800 year journey.
From lake and to the sea
A thousand more.

Other titles in the program are:

Complete description of the films can be found in the Events listing.