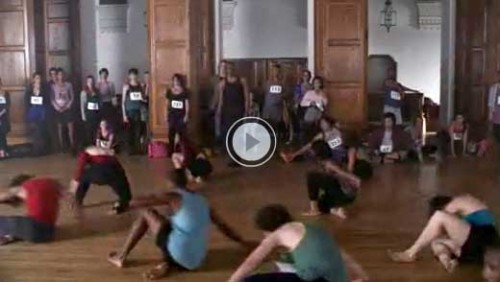 NBC's Parenthood featured a number of CalArtians in this dance scene.

Parenthood is a one-hour drama on NBC that’s inspired by the 1989 movie of the same name. Tonight’s episode has a little CalArts flavor, featuring several students from The Sharon Disney Lund School of Dance.

The show focuses on the trials, tribulations and imperfections of the large Braverman family. In one of the storylines, the commitment-shy Crosby (Dax Shepard) is forced to deal with adulthood more quickly than he’d like when an old girlfriend Jasmine (Joy Bryant) unexpectedly moves back home with her son. (Crosby and viewers find out later that it’s his son, too.) Jasmine has moved back to Northern California in order a dance career, and that plot twist leads to that CalArts connection.

Andre Tyson, assistant dean of The Sharon Disney Lund School of Dance, is a former principal dancer and company teacher with the Alvin Ailey American Dance Theater. He was contacted by the dance company to help assist in staging the dance scene for the NBC show. “I used some of our dance students in the filming of the Alvin Ailey audition scene in the Team Braverman episode,” he says. “It was a wonderful educational opportunity for our dancers to put their training to use in a different genre.”

**The entire episode is now available online until September.