Lifeline from Andres Salaff on Vimeo.

The Academy of Motion Picture Arts and Sciences announced the winners of the 37th Annual Student Academy Awards competition on Tuesday. Among the 13 students recognized was recent alumnus Andres Salaff (Film/Video BFA 09), who won in the Animation category for his CalArts thesis film Lifeline. The film follows a scientist as he travels through various dimensions in search of his lost love.  (It’s been posted above.)

“The film originally started out as something fun,” said Salaff in a recent phone interview. “But then I wanted to delve deeper into the story to discover why these things were happening and what drives the scientist to the ends of the universe.

“Then I figured out that the story I was drawn to was about love.”

He credits a number of CalArtians for helping him with this work, including his girlfriend and CalArts alumna Sun Ha Yoon (Film/Video BFA 08) who helped conceptualize the story and worked with him on the special effects. He also mentioned a number his Character Animation teachers and mentors–including David and Jennifer Skelly, Ted Ty, Rumen Petkov, Cornelius “Corny” Cole III and Mike Nguyen–as having inspired his work. “There’s no way this film just came from me, it was a collaboration with faculty and other students during my time at CalArts.”

Salaff’s film first competed in regional selections, and the finalists’ films were then screened by Academy members who voted on the list of winners. Additional screenings will be held by the Academy for its members to determine the final Gold, Silver or Bronze standings. (Winners receive cash grants of $5,000, $3,000 and $2,000, respectively.)

These placements will be announced at the 37th Annual Student Academy Awards ceremony on June 12 at the Samuel Goldwyn Theater in Los Angeles. The ceremony is free and open to the public, but advanced tickets are required.

We also found this video on Oscars.org site–it’s of director and CalArts alumnus John Lasseter (Film/Video BFA 79) talking about his own Student Academy Award experiences: 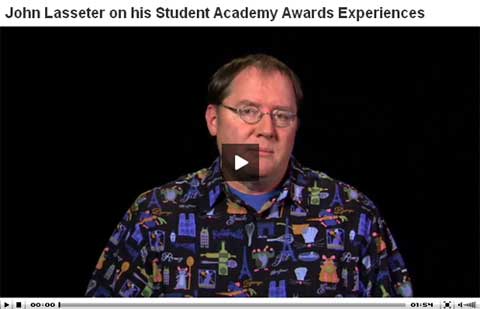