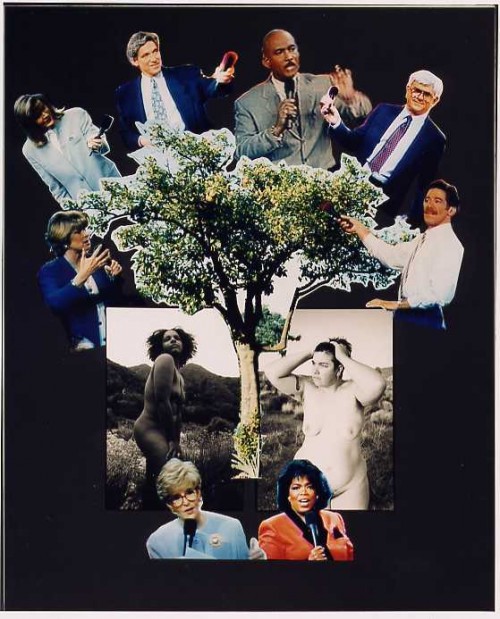 Part of Kaucilya Brooke's banned work 'Tit for Twat' from the Bucharest Biennale.

Art and censorship have a long and tumultuous history, and CalArts faculty member Kaucyila Brooke, an LA- and Vienna-based artist, has also fallen prey to censors at the Bucharest Biennale, which opened on Friday.

Brooke, an invited artist of the Biennale, was in the midst of the installation of her work, but the director of the National Museum of Geology (one of the Biennale venues) refused to allow completion of the photomontage, deeming it pornographic.

In a statement/press release issued by Brooke’s media representative:

This de-installation will make Kaucyila Brooke’s work, Tit for Twat, the only project to be censored during the 2010 Biennale.

“Now the work won’t be shown,” says Ms. Brooke, “because there’s no other institution that’s large enough to accommodate it. I’ve offered to be flexible, to install only part of the project, or show it in several spaces. But there’s neither the space, nor the resources to rent one, and they (BB4) refuse to consider making room within the exhibition that’s already installed.”

Kaucyila Brooke‘s ongoing project, Tit for Twat, is a three part photo montage, photo novella, gender art narrative designed for both exhibition and publication. Its chapters, Madam and Eve in the Garden, Can We Talk?, and It’s Not About Shame. Accessorize!, address the biblical presumption of heterosexuality and its relationship to other theories of origin, notions of innovation and origin in history, creationism, science and material culture.

Kaucyila Brooke’s comprehensive work Tit for Twat, having been developed since the early 1990’s, is one of the seminal works in gender oriented conceptual art of the last two decades. “Its prohibition at the Geology Museum in the frame of the Bucharest Biennale 2010 would not only mean a severe case of censorship but also a very sad denial for the Romanian public to see this outstanding, concise, political but at the same time warm and humorous work,” adds Stella Rollig, Director, Lentos Kunstmuseum Linz.

Brooke was still listed among the artists at the Biennale as of the show’s opening. The fourth annual Biennale is considered one of the most important contemporary art event in Romania, and this year’s showcases the work of 37 (36 not including Brooke) artists. It runs through July 25.