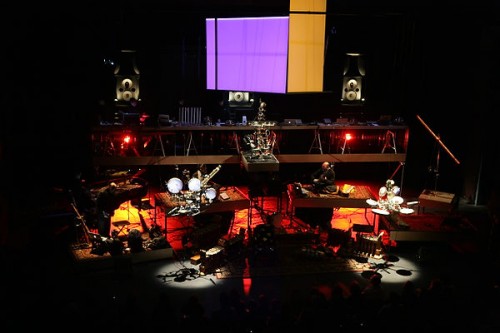 The KarmetiK Machine Orchestra at REDCAT earlier this year.

On Saturday, NPR’s Weekend Edition featured a story on the KarmetiK Machine Orchestra. Correspondent Laura Sydell interviewed Ajay Kapur, CalArts faculty and music director of the orchestra, as well as a number of students involved in the project from The Herb Alpert School of Music at CalArts.

What makes this project different from other robot orchestras under development is that these robots “improvise”–taking cues from their human counterparts–and that the computer programs used to run the robots were all written by CalArts’ students.

The programs that bring spontaneity to these robots were all written by the students. At a time when so much music is created with computers, Kapur says musicians should all know how to program. He says it gives them more control.

“Only knowing how to use, like, a software package that comes out from a certain company completely limits you,” he says. “And this is the only way that you can really think about this media and this art. Learning to program and build all these things yourself, you can make up whatever you want.”

Although school is out for the summer, students and faculty behind the KarmetiK Machine Orchestra continue their work. Kapur and CalArts’ School of Theater faculty member Michael Darling, the orchestra’s production director, wrote and worked with eight student authors to present academic papers at two of the more prestigious international music-technology conferences.

“At the Sydney conference, CalArts had more papers accepted than any other school,” said Kapur. “We killed it.”