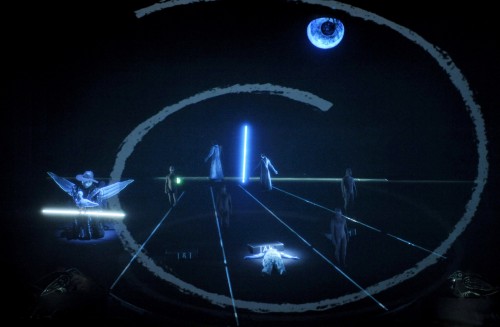 The Bayreuther Festspiele is an annual festival held in Bayreuther, Germany, which celebrates the works of 19th century German composer Richard Wagner. The Machine Project version could be considered Festspiele 101.

“Basement Wagner is a way to get people interested in opera,” said Michelle Yu, Machine Project operations manager. “We want to bring in people who may be a little intimidated by opera and make them un-intimidated.”

The installation for the series was created by artist and CalArts alumna Liz Glynn (Art/Integrated Media MFA 08) with performances and workshops organized by opera singer Juliana Snapper.

“Liz found old photos of Wagner sets and re-created set pieces for us,” said Yu. “On a much smaller scale, of course.” She likens Glynn’s project to the artist’s 2009 recreation of Rome.

Even the name of the series–Basement Wagner–points to the light-hearted nature of events scheduled during the course of the next few weeks, including a We Sing the Ring singalong on June 11. While the title could imply a low-brow approach to opera, Yu said that it was conceived from a more literal standpoint: “The installation and workshops are being held in the Machine Project Basement.”

Friday, June 11, at 8 pm: We Sing the Ring
A Richard Wagner singalong lead by Juliana Snapper. Tone-deaf amateurs and aspiring professionals are welcome to come and learn the major leitmotifs in Wagner’s Ring Cycle.

Saturday, June 19 at 8pm: the ing Cycle
A musical performance by ing. Closing night of installation.