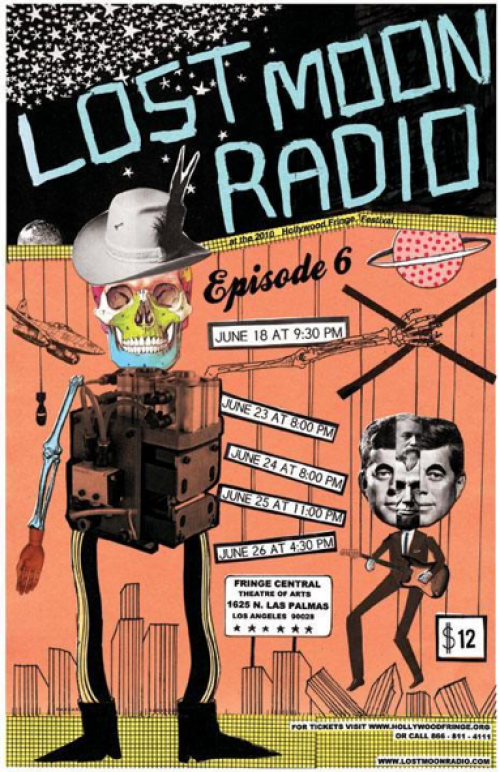 With the inaugural Hollywood Fringe Festival kicking off today, it’s no surprise to find the festival teeming with CalArtian work. Lost Moon Radio, a radio comedy and variety show, is just one of the many performances at the festival with links to CalArts.

Lost Moon Radio is a one-hour “radio show” from DJ Jupiter Jack, who claims to broadcast from outer space, but actually is stuck on a tasteless Top 40 station in the San Fernando Valley. When Jack spins tracks, what we hear are comic sketches and songs, performed live by a team of actors and a genre-jumping band. To Jack, they’re profound; to us, they’re hilarious. Lost Moon Radio, now in its 6th installment, won Live Comedy LA’s Show of the Year for 2009.

“The Fringe festival approached us to perform at Fringe Central at the Theatre of Arts, which is the main venue of the festival,” says Michael Wells (Music MFA 10), who is the vocal director, drummer, archivist and one of the composers of the music for Lost Moon.

Wells says that the gig is a perfect fit for him. Graduating from CalArts in May with an MFA in composition, he received his undergraduate degree in theater and is a self-proclaimed “silly man.” “Lost Moon is a place where all of these passions of mine go to have sex.”

Lost Moon sketches cover a broad range of topics, and like radio, often moves quickly from topic to topic. “It’s great comedy for people with a short attention span,” says Wells. The sketch topics range from higher-brow American cultural commentary to lower-brow fart jokes. Wells, who has been with the show since its inception in January 2009, says the music that the band writes matches closely with these comedy morsels. “In general, the music tends to give a spacey, retro-David Bowie vibe, but during a lot of the sketches, we try to emulate the music of a commercial or perhaps match the music of a particular time period.”

Although Lost Moon is often described as “A Prairie Home Companion for the millennium generation,” Garrison Keillor would probably not approve of a sketch like this: